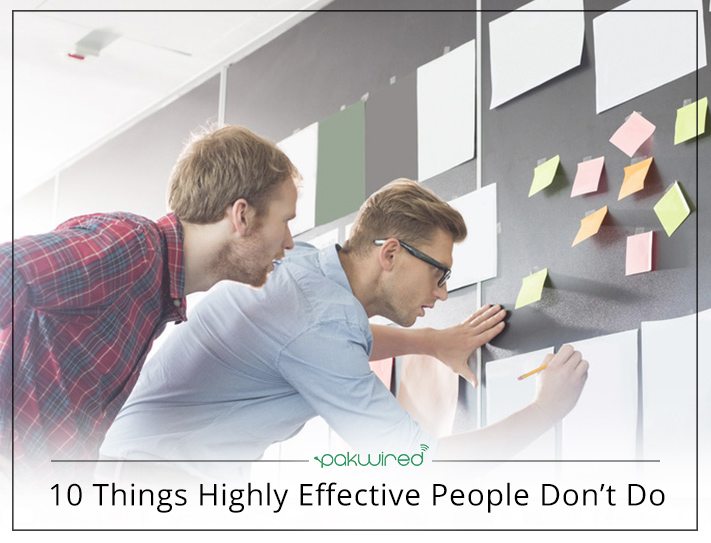 Highly effective people know how to make things happen. If you want to be more effective in your business and life, adopt these ten principles…

1. They aren’t afraid of a challenge.

Highly effective people don’t fear change. They’re willing to stretch beyond their current capabilities, because that’s the only way to learn and grow.

2. They own their faults and failures.

Highly effective people don’t make excuses. If they’re late, they don’t blame “the traffic.” They apologize for being tardy and adjust their behavior so it won’t happen again.

3. They operate from a long-term POV.

Highly effective people don’t overestimate the importance of any given event. Why bother worrying? It’s not what happens to you that matters (but rather how you choose to respond).

4. They have no tolerance for busy work.

Highly effective people don’t confuse “activity” and “results.” They invest their time into taking actions that will have a meaningful impact on their health, wealth, happiness, and relationships.

5. They don’t expect a freebie or hand-out.

Highly effective people don’t think the Universe owes them anything. They understand that you have to invest some time and energy into a goal before you can expect to see a return on your efforts.

6. They avoid drama, gossip, and negativity.

Highly effective people don’t want their existence to resemble a reality TV show. Life is fascinating enough without all that stress. They’re willing to be a sounding board, but won’t add fuel to the fire.

7. They embrace obstacles as “growth opportunities.”

Highly effective people don’t lose their minds at the sight of an obstacle. They embrace life’s struggles, because they require you to reach beyond your current capacities. In the process, you become a strong and resourceful person.

8. They don’t obsess with situations they can’t control.

Highly effective people know it’s impossible to control every thing that happens in their lives. They only concern themselves with what they can influence, which frees up time and energy that can be channeled in a positive direction.

9. They calculate the risk/down-side of major decisions.

Highly effective people don’t take any significant actions until they consider potential repercussions. What’s the worst thing that could happen? Answer honestly! (It’s probably not as bad as you would assume, but it’s still smart to confirm!)

10. They understand today is the best day to make a change.

Highly effective people don’t wait for the “best” day to start a business or become a freelancer. There is no such thing as a “perfect” time to change your life. Sorry for ruining your day. Bright-side: you can reinvent yourself at anytime. Why not now?

11. They aren’t addicted to the approval of other human beings.

Highly effective people don’t seek anyone’s approval. They care for others and do their best to make a positive impact; but they also understand that no matter how hard you try, some people just won’t like you… so, why resist this reality? There’s no good reason.

12. They under-promise and over-deliver whenever it’s possible.

Did you notice how this article is called “10 Things Highly Effective People Don’t Do” (but then I surprised you with a bigger list of 12 things instead?). Boom! Do likewise in both your personal and professional life. Amaze your friends, lovers, customers, and freelancing clients by exceeding their expectations at every turn.

Share this article on Facebook so all the people in your life can learn how to be highly effective, too.