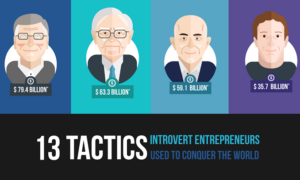 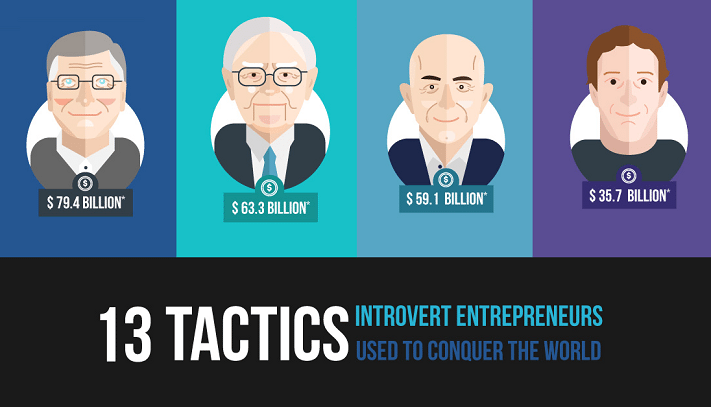 In order to make it in business you have to be confident, brash and outgoing. You need to have superior people and social skills to get others on side and be an instinctive expert in PR. Or so the theory goes. And without doubt there are some prime examples of this being true. Just look at Richard Branson, a man with an easy charm and constantly popular public image.

However, you don’t have to have swagger and confidence to run a major multinational organisation. In fact, many of the best CEOs are quiet, shy and introverted. Being less about show and more about focus has allowed some introverted people to become the world’s biggest business leaders. Their qualities of determination, focus, and quiet concentration have been the driving force behind their success.

A new infographic from YourTradeBase has taken a closer look at 13 of the world’s most successful introverted CEOs. Here’s a small selection of some of the names that made the list.

Perhaps the most famous business leader in the world and certainly one of the most successful. This quiet man is renowned for his love of solitude and deep thinking time. Rather than adventure sports, he spends his leisure time reading and uses his introvert qualities to his advantage.

The man with the golden touch in the markets is a down to earth, regular Joe. He still lives in the same house he has for decades and even rides the bus to work on occasions. He’s embraced his introvert skills and used this quiet, intelligent nature to gain a better understanding of how money markets work than anyone else on the planet.

Living proof that the geeks shall inherit the earth. Zuckerberg’s talent for computing and love of challenging himself led him to create one of the world’s biggest companies – Facebook. Preferring to interact online than in real life, Zuckerberg is living proof that you can be a quiet person but make a big noise.

The man behind Tesla and Space X, Musk is clearly some kind of genius but not the kind that likes to go around shouting about it. Instead he focuses his energy on thinking and coming up with big ideas. His new interest in battery storage could just save the world.

Despite being the CEO of one of the world’s biggest companies and following in the footsteps of one of the most charismatic business leaders of all time (Steve Jobs), Tim Cook is known as the ‘most private CEO ever’. Preferring to play his trombone, cycle and rock climb than conduct interviews. He even goes on holiday alone. But none of that has stopped him getting to his lofty position through ability.

The list of introvert CEOs doesn’t stop there. The leaders of many of the world’s biggest companies, including Amazon and Google, are also renowned for being quiet and understated people.

So, if you’re starting your own business or trying to figure out how to be more successful, just remember that it’s not all about fame, networking and PR. Sometimes you just have to focus more clearly on your product and business, using the skills and benefits that come with being shy and introverted.