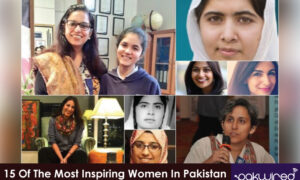 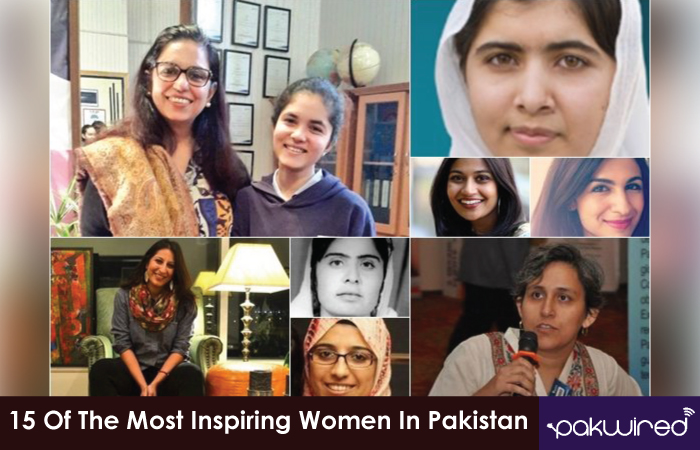 Pakistan has many immensely talented women working both at home and abroad to make the country and the world a better place. We have compiled a list of some of the most inspiring women in Pakistan.

Roshaneh Zafar (@RoshanehZafar) is an active social entrepreneur with an impressive list of credentials. She was an Ashoka Fellow and worked extensively at the World Bank on Water and Sanitation issues. After meeting with Muhammad Yunas and seeing the impact of Grameen banking, she started the Kashf Foundation in Pakistan in 1996, and is the Managing Director of the Foundation. She also started Kashf Microfinance Bank Limited.

“Believing that the Grameen model could help empower women both economically and socially, Roshaneh ignored warnings that a microfinance program focusing on women would not work in Pakistan.” The initiative has since then proven to be a success, and Kashf Foundation provides microfinance, job opportunities and training for women and supports over 500,000 women and families in Pakistan. Roshaneh Zafar has received several awards including Skoll Award for Entrepreneurship, Tamghai Imtiaz and Vital Voices Economic Empowerment Award, among others.

Jehan Ara (@jehan_ara) is the President of Pakistan Software Houses Association for IT and ITES (P@SHA). Se has a considerable amount of experience in communications, media and marketing in several countries around the world, and has put this knowledge to use in transforming P@SHA into a center for industry innovation and growth. She is sought after for events and talks, and regularly supports tech innovation forums.

An optimist, she is passionate about product and service development, new ideas and empowering youth and women in Pakistan. She has helped kick start several initiatives including the Pakistan branch of Women on the Web, Take Back the Tech, and Women’s Virtual Network, all of which aim to have some impact on improving women’s social situations and supporting their entrepreneurial

Kalsoom Lakhani (@kalsoom82) founded Invest2Innovate, also known as i2i, in 2011. Invest2Innovate connects budding entrepreneurs with investors and support, in line with their belief that “entrepreneurs have the power to change the world.” They have an i2i accelerator, which provides support to startups and matches them with i2i Angels, their investors.

Kalsoom Lakhani is active in a number of forums: as a founder and Editor of CHUP blog, co-ambassador of Sandbox, co-chair for Blended Profit, and a World Economic Forum Global Shaper. She worked as Director of Social Vision before she founded i2i, and has considerable experience in building support and networks for startups and young entrepreneurs in Pakistan.

Sughra Solangi overcame significant odds and a difficult situation to become “an exceptional example of what an oppressed woman can achieve through sheer determination and strength.” Married off at 12 and divorced at 18, she struggled to educate herself at home and despite social and cultural obstacles, went on to get her High School Certificate. She became a teacher and realised that people were not sending their daughters to school for two reasons: lack of funds and social customs. Following her belief that changing attitudes is as important as economic development, she began Marvi Rural Development Foundation.

The Foundation has projects that support literacy, health and well-being, development of community organisations, income generation and ending violence against women. She has had significant success in developing her village Solangi, Khairpur District, and developing new villages every year in Sindh. She became an Ashoka Fellow in 1999, and for her achievements she received the International Women of Courage Award in 2011.

She wrote anonymously for a blog detailing her life and education under the Taliban in Swat for the BBC for years before being targeted and having to leave Swat and Pakistan. More recently, she addressed the UN on her 16th birthday, and launched the Malala Fund, which supports education for girls around the world.

Maria Umar (@MariaUmar) is the founder of Women’s Digital League (WDL), which is an online portal that provides digital services. WDL aims to tap into what it calls “a vast dormant workforce which is either discouraged from working outside or has trouble finding work opportunities.” Maria Umar was inspired by the possibilities inherent in such a service, after she had to work from home following maternity leave, and was using oDesk.

WDL is different from oDESK and other sites because it focuses on women, who for various reasons are unable to work outside their homes, and also women in rural areas who lack the required equipment and training to work online. WDL provides these services, and enables women to work online on “data entry and data conversion tasks” and “tasks like wordpress, writing, graphic designing” for various clients.

Saba Gul (@sabagl) is the founder of popinjay, which was previously known as BLISS. Popinjay is a non-profit organisation that works with artisans in Pakistan to produce handmade and high quality handbags. It focuses on empowering these artisans, especially women, as the website states that they “offer our artisan women practical training, fantastic wages, dignity and a path to self-sufficiency. By connecting them to global markets, we bring them a fair value for their work.”

Saba Gul is a graduate of MIT and a self-proclaimed “engineer-at-heart” with a talent for social entrepreneurship and finding solutions to enduring poverty through empowerment.

Sabeen Mahmud (@sabeen) is the President of The Indus Entrepreneurs (TiE ) in Karachi. She started PeaceNiche and one of its very first projects, T2F, which is also known as The Second Floor Café. T2F is a space for people to come together to partake in events and discussions revolving around activism, innovation, arts and culture.

She stated in an interview: “It is my biggest dream to change the world for better through internet, design and other communication technologies & T2F is a part of that dream.” PeaceNiche has several projects under its belt, and T2F is just one of them, which aims to find peaceful solutions to social problems through dialogue and debate and inspiring events.

Rabia Garib (@rabiagarib) has a passion for education and tech innovation. She used to run CIO Pakistan and was a co-founder at Rasala Publications, but is now focusing on being the Chief Wrapper at ToffeeTV, which she founded with @taleazafar. She is also an Eisenhower Fellow and a recipient of the LadiesFund Trailblazer Award.

ToffeeTV focuses on providing children with learning and entertainment in Urdu. Furthering education is a particular interest of hers, as is the medium of music for promoting it. Rabia Garib has promoted the local IT industry and the way it helps to shape Pakistan’s global image and often explains the following: “The future of any country is its children (who then become the youth) and the preservation of its language, culture and heritage. If you aren’t already focusing on localized content development for education, your future will be shaped by others.”

Sheba Najmi (@snajmi) is the founder of Code for Pakistan, a “non-profit building a non-partisan civic innovation ecosystem to improve quality of life across Pakistan.” Describing her project, she explained: “I want to put forth this idea of Gov 2.0 which has caught on all over the world; which is to use apps and data to reframe the relationship between local government and citizens.”

She has extensive experience in design management, product strategy, product management, developing entrepreneurship and startups, and civic engagement. Starting out as a TV anchor and reporter, she previously worked as a Fellow at Code for America and at Yahoo. She also works as a Growth Hacker at Tradecraft, a Consultant at the World Bank, User Experience Design Consultant at Cloudwords, Inc. and is on the Board of Advisors of Go-Fig Solutions.

Sophia Hasnain has considerable experience in telecommunications and innovative Internet technology. She is currently working as a Trends and Transformations Consultant and has previously worked for Telenor in Pakistan, and Deutsche Telekom AG. She also launched Pakistan’s “first real-time online Lottery in Pakistan with 5000 retail terminals.”

Her focus in consulting is on innovative products, and she helps companies to “take a leap, start innovating, become leaders of their markets, bring their products back into focus; manage the product, manage the customer experience, manage the growth and grow the revenues.”

She specialises in various aspects of team management including client management, and establishing goals. She has previously worked for several software companies and also does voluntary work where she mentors managers and budding leaders.

Erum Khalid has worked as the Director of Technology at Alchemy Technologies and as a Project Manager at Folio3. She has worked extensively on software development, software engineering and design, and project management.

She is a graduate of the National University of Computer and Emerging Sciences, where she has also worked as a visiting faculty member.

Maliha Khan works at Folio3 as the Director of Engineering for Social Media and Consumer Web Applications. She has over a decade of experience in developing web and mobile applications, where she has managed, designed and marketed them.

She completed her degree at Shaheed Zulfikar Ali Bhutto Institute of Science and Technology, and has worked at various organisations including PixSense Inc., and Clickmarks (Pvt) Ltd. Maliha Khan took part in an MIT Summer Research Program and has been behind the development of several innovative apps such as Your Place, Fashion Playtes, and Brilliant Earth.

Fariha Akhtar (@farihaak) is a software engineer, and is well known as an avid blogger and activist. She writes regularly about issues relating to Internet and digital privacy, growth in the tech sector and app development. She is also known for her live blogging.

She has been a part of TakeBackTheTech, a campaign to use technology to end violence and abuse towards women. A self-described humanist, and deeply interested in issues of women’s rights and online activism, she “came up with lots of ideas for creating awareness about privacy and security online,” along with providing information and advice about Internet privacy and protection.