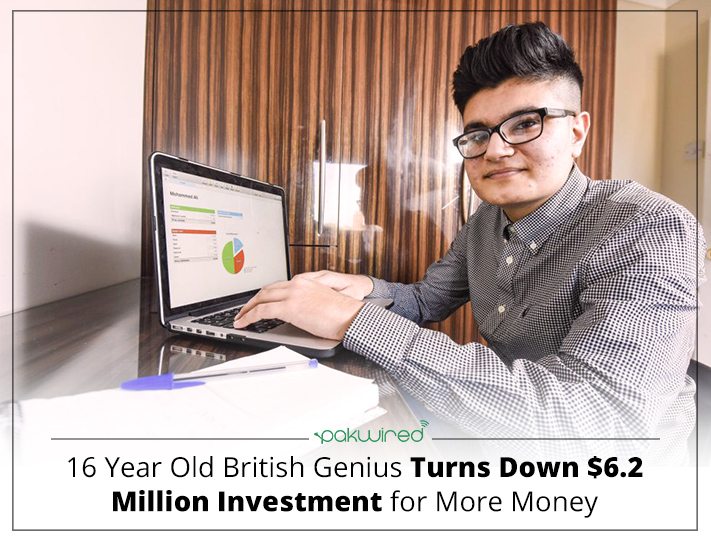 A British-born Pakistani origin teenager is making the news these days for a most peculiar reason! Being hailed in the British media as the next Zuckerberg, the 16 year old Muhammad Ali is a modern day genius in every sense of the word.

At the tender young age of 12, when most other guys his age were learning how to play their first computer games, Muhammad Ali had already launched his first company and earned more than 40,000 pounds through his video game and financial app.

Currently, the 16 year old from Dewsbury, Yorkshire is now working towards launching a price-comparison website weneed1 in partnership with Chris Thorpe and he claims that this website will be unparalleled by any other competitor in the existing market.

Ali recently made it public that he has been approached by a group of interested American investors from a global data driven company, in London over the Christmas. The investors offered to buy the website for a sum of more than $6.2 Million. Ali, however, turned down the offer because he is hoping to raise an even bigger sum from the website under progress than the amount offered to him. Considering that his technology and concept is worth millions already, the whizz kid is quite passionate about the valuation once the website is in use publicly.

He admits understanding the big risk he has been taking turning down the sizeable sum investment offers, however, he feels that he can not settle for anything less that what he has envisioned for himself and the way he wants his technology to be employed.

Muhammad Ali is a tech genius with a flair for the creative. His recent venture involves creating a website that helps people compare insurance rates in real time instead of just providing pre-fixed quotes. He says that he wants to help people actually use technology the way it was meant to be used. The algorithms he uses to turn his ideas into actual programs are all the rage.

Ali has already made the news previously in 2006 when he invented a game that had a subscription fee of 5.99 pounds and helped him generate 30,000 pounds.

Ali said that he learnt coding through books and YouTube. He designed his much-coveted website when he was studying for his A-level exams right in his bedroom!