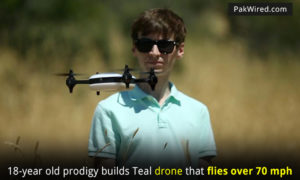 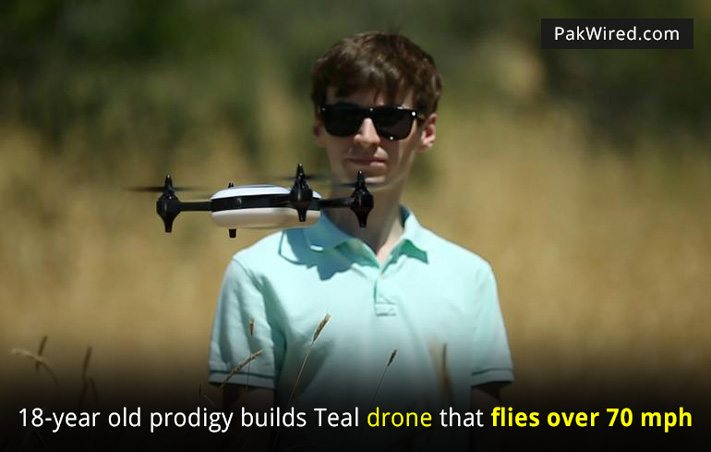 George Matus Jr. has built a Teal drone, that can go fast at up to 70 mph (112 kph) in up to 40 mph (64 kph) winds, at the tender age of 18 when most of the teens plan to choose a program that they would like to get themselves enrolled.

While talking to CNNMoney, George Matus Jr. stated that:

“The drones are available for pre-order starting Wednesday for $1,299, will be capable of flying as fast as 70 mph and sustaining winds of up to 40 mph. That makes them faster than current out-of-the-box drones on the market”

Popular consumer drone manufacturer, DJI’s drones currently fly between 45 mph to 49 mph. The top speed of 3D Robotic’s fastest drone is 55 mph while the Bebop 2 which is Parrot’s fastest drone flies over at a maximum speed of 40 mph.

Teal drone has the ability to fly over 70 mph but George Matur Jr. negates the notion of speed as the primary selling point. Teal drone is principally a flyable smart computer which comes with a pre-installed minicomputer that can handle machine learning, image recognition and more drone capabilities. All these features are rarely or not offered by other drones.

George Matus Jr. who lives in Salt City with his parents stated that:

“Until now, consumer drones typically serve a specific purpose – like racing, aerial photography or hobby flying. Teal drone can do all those things but also has the capacity for more. We wanted to go for universal”

Teal drone is small enough to slip into backpack. It is waterproof, durable and portable. In front of the drone is an electronically stabilized 13 megapixel camera that can record video at 4K resolution. The battery and arms of the drone can be removed and replaced if they break.

Similar to other drones, the battery doesn’t last more than 10 minutes and this is primarily the reason why Teal drone comes with 2 batteries so you can pop in the second batter after the first one dies.

George Matus Jr. is planning to introduce an open software development kit so that the apps can be built for the drone by the developers. The apps could include anything from augmented reality to advanced autonomous flying to search and rescue.

18-year old prodigy is not a rookie by any stretch of the imagination especially when it comes to drones. The wonder kid is a serious pro. He had already built his first flying quadcopter by the age of 12. Moreover, he also served as a test pilot for a drone company.

Matus was selected among 2800 candidates 5 years later to be a Thiel Fellow from the Peter Thiel’s Foundation. In exchange for missing college or dropping out to work on their own ventures, the company pays $100,000 to budding entrepreneurs over the course of two years.

At the age of 18, Matus decided to launch his own drone brand, Teal which are expected to ship later this year. The drones are made and modeled in Texas before being assembled in Utah.

This Article was originally published on CNNMoney