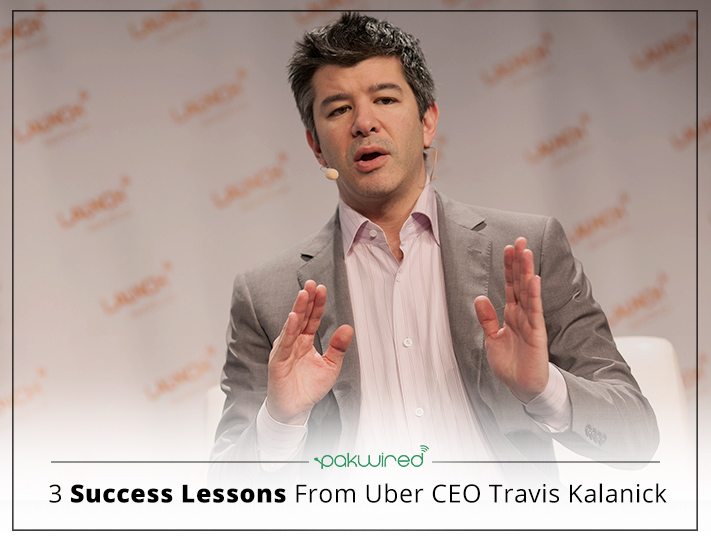 Travis Kalanick is a controversial figure. The CEO and founder of Uber, this entrepreneur is one of the leading lights of Silicon Valley, and his unique rise and the success of his company has turned heads, and had many wondering exactly how he did it.

We’re here to go over three of the most important lessons that can be learned from Travis Kalanick and his company’s meteoric rise, and how you can understand and implement these lessons in your own life.

When Travis Kalanick began his first company in 1998, he didn’t wait around to finish school, or to create something new. He dropped out of college at UCLA to found his first tech startup – Scour Exchange, one of the first peer-to-peer file exchange services. And though his first company was shut down by the MPAA for copyright violation, and declared bankruptcy, Travis wasn’t dissuaded from his big visions.

Two years later, in 2001, he founded filesharing service Red Swoosh, which was acquired six years later by Akamai Technologies for $19M. And Travis didn’t stop there. He invested in a new company in 2009. You might have heard of it. It’s worth $70 billion, and it’s called Uber – the largest single ridesharing service provider in the world, and an industry leader in cutting edge technology, especially in self-driving cars.

The best lesson to take away from Travis is not simply that you need to drop out of school, or invest in a risky startup. Obviously, Uber’s path to success was as much a result of (a little bit of) luck as it was smart investment and a great business model. However, the lesson remains that without risk, you won’t get reward.

Think about it. Kalanick likely didn’t bank all of that $19M from the sale of Red Swoosh himself, but even if he only got a small percentage, he could easily have lived out the rest of his life comfortably. Instead, he took a risk. He invested his money in a small ridesharing company in 2009, and in 2016, he’s an industry leader of the most high-valued venture capital backed firm in history. Great risk means great reward, and Travis Kalanick is an example of that.

And even still, Uber and Travis Kalanick are not resting on their laurels. For these entrepreneurs, it’s not enough just to dominate the market in the short-term by squeezing out competition and continuing to innovate your current products. You also need to invest in the future, which Kalanick believes in a big way. In a recent interview with CNBC, Travis Kalanick stated that:

“We are investing in driverless technology and the answer there, what that’s about is, look Google’s investing in this stuff, they’ve been doing it for 10 years almost, why? Well a million people a year die in cars, and how many more millions get injured, it’s just needless…”

Kalanick and Uber clearly believe in self-driving cars not just because the automation means greater profits, but because currently, car-related fatalities are one of the largest sources of preventable deaths in the US, with the highest percentage of deaths per 100,000 people in 2015, according to FARS, a government watchdog organization.

So despite the high costs related to innovating cutting-edge driverless technology, Uber continues to make the investment, even if it means cutting down short-term profits.

The lesson to take away from this is that, while market dominance (and Uber does dominate – an 80% share in the US) is great, a long-term vision is required for a company to innovate and continue their growth, and Uber and Travis Kalanick embody this idea completely, with their focus both on profit and safety.

Uber has not been without criticism. Critics have taken the company to task for attempting to monopolize the market, for paying poor wages, and for underhanded methods of dealing with competition, among other things.

Uber has addressed most of the criticism levelled in its direction, and improved accordingly, though that’s not enough for some critics of ridesharing.

Despite this criticism and pushback, Uber continues to invest in the future and continue with its current business model, and CEO Travis Kalanick believes heavily in the future of the company, despite critics and naysayers. From his interview with CNBC:

“…So, look, our mission is transportation as reliable as running water, everywhere for everyone and we’ve got a long way to go…”

This vision is still a long way from being realized, but it’s important to have. Without a strong vision like that of Travis Kalanick, large companies like Uber risk losing their way, and becoming about simple profit and short-term ROI – this is one of the reasons that Uber still hasn’t gone public, despite rumors about their interest in an IPO in 2017.

Jack Kalanick has a vision, and no criticism, no amount of money, and no distraction will be enough to sway Uber from its global mission and quest to become the most reliable, largest, and most dominant transportation provider in the world. And the main thing to learn from this is that, as long as your company is successful, and as long as you are continuing to fulfill your vision, you will be a success – no matter what others may say.

There are plenty of other lessons to be learned from Uber, but these are the three that Travis Kalanick, the CEO, embodies: Take a risk; Prepare for the future; And have a vision of what that future will look like.

By implementing these lessons in your life, you’ll find that you better prepare yourself and your companies not just for success in the immediate future, but for the long term growth and dominance as well. This is just how Uber has done over the last seven years since its humble beginnings in New York City in 2009.

So this is it for today. Feel free to review my blog for more tips on entrepreneurship and marketing.

What do you think of these business lessons? Can you think of any others that you learned from the way Kalanick grew Uber? Please share below.