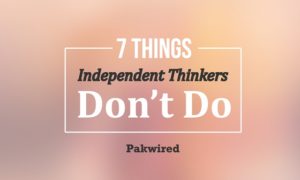 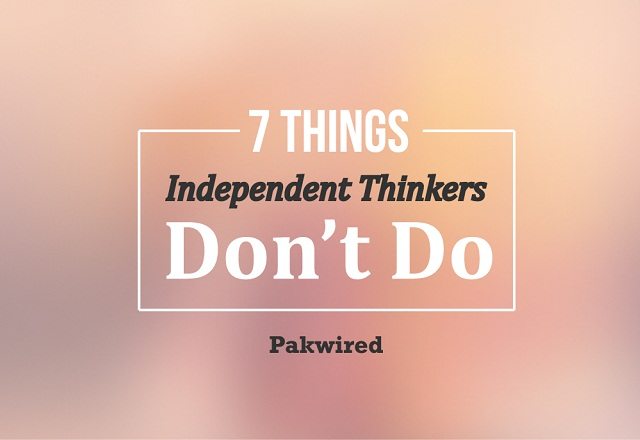 Independent thinkers are an endangered species in our conformist society. You might pride yourself on your ability to follow rules, but you need to know there is nothing admirable about conformity. Mindlessly conforming to another person’s standards will rob you of your independence.

“Conformity is the jailer of freedom and the enemy of growth.” – John F. Kennedy

History is rich with independent thinkers who changed the world. Where do you think we would be as a society if no one had enough courage to march against the current? Slavery would still be a reality, since there wouldn’t have been a civil rights movement. Our primary means of transportation would be a horse and carriage, since Henry Ford wouldn’t have been crazy enough to invent the automobile.

1. They don’t see themselves as a victim.

“Parents can only give good advice or put them on the right paths, but the final forming of a person’s character lies in their own hands.” ― Anne Frank

Independent thinkers accept responsibility for their thoughts and actions. They know pitying themselves will make them feel defeated and depressed. Instead of agonizing about how bad their life is, they focus on what they can do to make things better. They treat every day like an opportunity to become stronger, because they are the only person who has the power to improve their situation.

“Blind belief in authority is the greatest enemy of truth.” ― Albert Einstein

Independent thinkers believe trust is a gift that must be earned. They know people in positions of power will do everything they can to conceal a truth that could damage their credibility. Instead of assuming a politician is being genuine, they take their speeches with a grain of salt. They aren’t afraid to question authority figures, because that is the only way to discover if a person is worthy of trust.

3. They don’t believe every answer can be found in a textbook.

“Responsibility to yourself means refusing to let others do your thinking, talking, and naming for you; it means learning to respect and use your own brains and instincts; hence, grappling with hard work.” ― Adrienne Rich

Independent thinkers trust their intuition. They know life is full of complex questions that can’t be solved with a textbook solution. Instead of following rules set by another person, they determine a personal code or philosophy that guides their decision-making. They search their souls to figure out what is important to them, because they are the only person who has the right to decide how to live their life.

4. They don’t follow a religion because their family “said so.”

“When we blindly adopt a religion, a political system, a literary dogma, we become automatons.” ― Anaïs Nin

Independent thinkers don’t let their friends or family dictate what deity they should believe in. They know it would be silly to follow a religious code for no other reason than, “My parents raised me that way.” Instead of blindly following a dogma they were introduced to as a child, they reconsider its legitimacy as an adult. They only follow a religion if it survives this process, because faith is more meaningful when it is a personal decision between them and the deity they choose to believe in.

5. They don’t think less of people who disagree with them.

“How much time he gains who does not look to see what his neighbor says or does or thinks, but only at what he does himself, to make it just and holy.” -Marcus Aurelius

Independent thinkers accept people of all races, religions, and sexual orientations. They know it is wrong to look down on another person just because they have a different worldview. Instead of pushing someone away for their differences, they focus on the similarities that might create an emotional connection. They refuse to condemn, because they know a person’s belief system is shaped by life experiences that they couldn’t begin to understand.

6. They don’t let other people tell them what’s right and wrong.

“To go wrong in one’s own way is better than to go right in someone else’s.” ― Fyodor Dostoyevsky

Independent thinkers don’t get caught up in the opinions of others. They know there is no point in following societal norms that don’t agree with their beliefs. Instead of trying to fit into social constructs like gender roles, they behave in whatever way makes them feel happy and fulfilled. They write their own rule book, because a life lived according to another person’s standards isn’t a life worth living.

7. They don’t agonize over every decision.

“Sometimes, making the wrong choice is better than making no choice. You have the courage to go forward, that is rare. A person who stands at the fork, unable to pick, will never get anywhere.” ― Terry Goodkind

Independent thinkers act swiftly and decisively. They know there is no good reason to delay a decision that must be made. Instead of worrying about making the “perfect” choice, they use whatever information is available to make the best choice they can. They let go of the outcome past that point, because they know an ability to adjust course after making a decision is more important than the decision itself.

An independent thinker wouldn’t assume these points are true just because I said so. Look at this article (and others like it) through the lens of your unique perspective. If it’s relevant to your life, great. If it’s not, find something that is. Are there any points you would add to this list? Tell us in the comments.