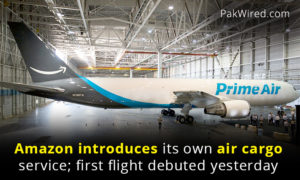 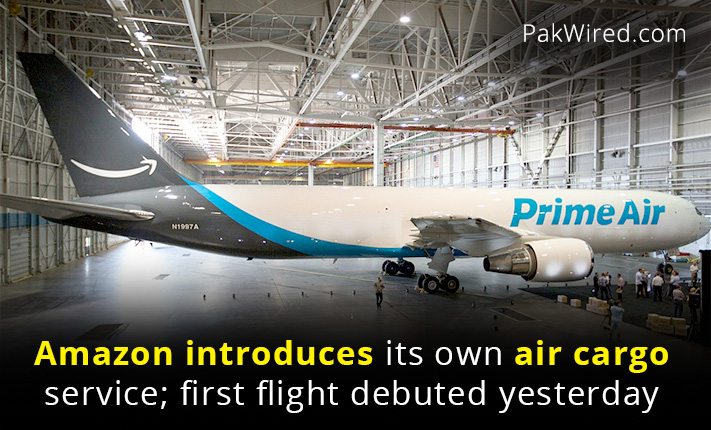 The largest e-commerce store Amazon is in a league of its very own. The e-commerce giant has entered into agreements to lease 40 dedicated cargo airplanes to serve customers. The first jet named ‘Amazon One’ made a debut yesterday at the annual Seafair air festival in Seattle. Thousands of Seattle residents and Amazon employees attended the event.

The plane is embroidered with ‘Prime Air’ on the fuselage whereas the plane’s tail features company’s signatory smile. Moreover, a prime number is also imprinted as identification – N1997A, which also states the year Amazon went public.

The air cargo delivery network will use 40 Boeing 767s. Amazon will lease the aircrafts from 2 air transport companies Atlas Air and ATSG. Presently, Amazon’s 11 airplanes are flying with additional places to roll out over time.

He also expressed his delight on the inaugural flight in Seattle which was attended by thousands of residents and employees.

Reason of starting own cargo service

The primary reason of the launch of Amazon air cargo planes is faster deliveries of the consignments.

The rumors of air cargo network went public late last year. According to Seattle Times, Amazon was frustrated over the delayed shipments involving United Parcel Service (UPS). During the holiday season of 2013, most of the customers received their parcels after Christmas. As a result, Amazon had to offer $20 gift card to affected customers along with the refund of shipping cost.

The aforementioned move triggered Amazon to launch their air cargo service to avoid embarrassment in the future. The notion to introduce its own cargo service may put Amazon in direct competition with UPS and FedEx. This is only possible if the company agrees to ship inventory sold by other merchants. However, as of now the company’s mission is all about faster and reliable shipping for its customers.