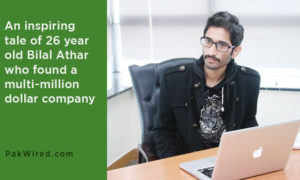 What is common between Johnny Depp, Eminem, Jim Carrey, Harry Styles and Nicole Kidman? Any wild guesses? Well, all of them were school drop outs yet that did not cease them to become what they are now. The question arises here that is dropping out of high school the key ingredient to success? Certainly not but it definitely worked for Bilal Athar, a 26 year old Pakistani entrepreneur who is now drawing comparisons with the likes of Bill Gates.

During his school days, Bilal Athar wasn’t sure about his future and he was similar to 90% of the Pakistani students who was simply unaware and confused about the times ahead. During that time, Bilal Athar also figured it out that going to the university is not in his radar and later he planned to pursue ACCA degree so that he could become an auditor. Unfortunately (or fortunately) that did not work out for him either.

Bilal Athar also tried his luck in singing as his track record in extracurricular activities during his school days was quite good. He had participated in various events during his school gigs as a rock guitarist but his father, who was also a good mentor to him, counseled him to utilize his talent in something substantial, preferably computers. Bilal Athar was only 5 years old when he got his hands on computer for the first time and that is probably from where his passion for computing sparked.

On the recommendation of his friend who resides in UK, Bilal Athar completed 2 CCIE certifications. He started to get plenty of job offers while he was 21 but he rejected all of them including one from big telecommunication company in Saudi Arabia. Instead he chose to work for Beaconhouse school only to realize 6 months later that he is a misfit and that his CISCO expertise are not utilized at all.

At 22, Bilal Athar formed his own company, Ikhtira Systems (a disaster recovery solution) in Multan but within 10 months of the operation the company failed and it indeed turned out to be a disaster for Bilal Athar since the company suffered gigantic losses and was eventually closed. He did not want to back to his home to get his parent’s support. People who appreciated the fact that he started a company at 22 were now making fun of him. Sadly, Bilal didn’t have enough money to satisfy his hunger for 3 consecutive days.

However, this initial failure would not last for long. Bilal Athar soon took multiple coding-related freelance jobs to make ends meet. In the meantime, the young entrepreneur developed a new and improved startup, Wifigen, which allows anybody to access free WiFi in public areas simply by using their social media credentials, such as Facebook or Twitter. In return, consumers will receive coupons, store recommendations, and discounts.

Later, Bilal Athar drew the attention of one client who was also one of the 25 most intriguing minds of the new economy by business 2.0. It was around this time when Bilal Athar began to help a new anonymous client, whom he had met through a freelance website. The client realized Bilal’s potential and after numerous conversations, Bilal’s client requested a Skype call and revealed himself to be the former IBM Vice President of Internet Technology, John Patrick, holds an incredible presence in both business and technology. John Patrick admitted that one of the first reasons he was drawn to Bilal was because of his outstanding English language skills, and later, of course, his technological talents.

Bilal pitched his idea of Wifigen to John Patrick who liked his idea to the core but initially he was circumspect to invest in the project. However, later on 23rd March 2015, Patrick finally moved to invest in Wifigen, valuing the startup at $1 million.

Bilal Athar then came across a representative at Changi Airport during a business trip to Singapore, who exhibited immense interest in deploying Wifigen on their airport. Bilal then started beta testing of Wifigen on Singapore’s airport. Later, he signed one of the biggest deals in the history of Wi-Fi at Tahiti Island, which wanted to use Wifigen to give a better experience to tourists. Wifigen then was seen as a product with a huge application in the tourism industry.

Bilal Athar explained how Tahiti is gradually losing tourists every year with a constant decrease in people visiting the island. He said:

“One of the biggest problems is most of the visitors are Chinese and they can’t live without the Internet, they have to be able to use it. Since they don’t have very convenient [online access] … on the islands, these people then tend to go other places.That is where Wifigen is hoping to step in with their plan for a ‘smart island’, with Wi-Fi available every single place, for visitors and local people alike.”

Bilal Athar is also trying to integrate artificial intelligence with Wi-Fi for the last three months. It will help the advertisers to know exactly who the end user is and how deep his pockets are, so they can accordingly pitch them different products.

Bilal Athar believes that the key to Wifigen’s success would be to move into more markets. His company currently has a multi-million dollar valuation while trying to raise another round of investment. Bilal has only one thing to say to all the aspiring entrepreneurs:

“Keep failing until you are ready to change the world.”