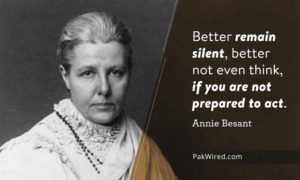 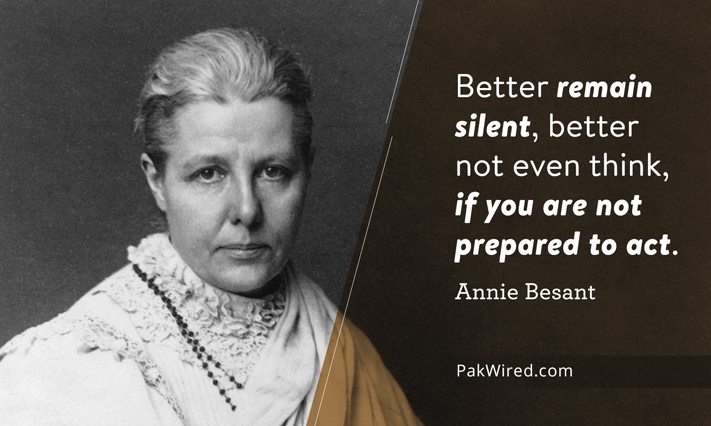 In 1867, Annie at age 20, married Frank Besant, a clergyman, and they had two children, but Annie’s increasingly anti-religious views led to a legal separation in 1873. She then became a prominent speaker for the National Secular Society (NSS) and writer and a close friend of Charles Bradlaugh. In 1877 they were prosecuted for publishing a book by birth control campaigner Charles Knowlton. The scandal made them famous, and Bradlaugh was elected M.P. for Northampton in 1880.

She became involved with union actions including the Bloody Sunday demonstration and the London matchgirls strike of 1888. She was a leading speaker for the Fabian Society and the Marxist Social Democratic Federation (SDF). She was elected to the London School Board for Tower Hamlets, topping the poll even though few women were qualified to vote at that time.

In 1890 Besant met Helena Blavatsky and over the next few years her interest in theosophy grew while her interest in secular matters waned. She became a member of the Theosophical Society and a prominent lecturer on the subject. As part of her theosophy-related work, she travelled to India. In 1898 she helped establish the Central Hindu College and in 1922 she helped establish the Hyderabad (Sind) National Collegiate Board in Mumbai, India. In 1902, she established the first overseas Lodge of the International Order of Co-Freemasonry, Le Droit Humain. Over the next few years she established lodges in many parts of the British Empire. In 1907 she became president of the Theosophical Society, whose international headquarters were in Adyar, Madras, (Chennai).

She also became involved in politics in India, joining the Indian National Congress. When World War I broke out in 1914, she helped launch the Home Rule League to campaign for democracy in India and dominion status within the Empire. This led to her election as president of the India National Congress in late 1917. In the late 1920s, Besant travelled to the United States with her protégé and adopted son Jiddu Krishnamurti, whom she claimed was the new Messiah and incarnation of Buddha. Krishnamurti rejected these claims in 1929.[1] After the war, she continued to campaign for Indian independence and for the causes of theosophy, until her death in 1933.

On her 169th birthday, we’d like to pick a few of her most thoughtful quotes that are sure to strike a deep chord within you.

1. Better remain silent, better not even think, if you are not prepared to act.

2. Quick condemnation of all that is not ours, of views with which we disagree, of ideas that do not attract us, is the sign of a narrow mind, of an uncultivated intelligence. Bigotry is always ignorant, and the wise boy, who will become the wise man, tries to understand and to see the truth in ideas with which he does not agree.

3. What, after all, is the object of education? To train the body in health, vigor and grace, so that it may express the emotions in beauty and the mind with accuracy and strength.

4. A people can prosper under a very bad government and suffer under a very good one, if in the first case the local administration is effective and in the second it is inefficient.

5. As the heat of the coal differs from the coal itself, so do memory, perception, judgment, emotion, and will, differ from the brain which is the instrument of thought.

6. Refusal to believe until proof is given is a rational position; denial of all outside of our own limited experience is absurd.

7. The mental body, like the astral, varies much in different people; it is composed of coarser or of finer matter, according to the needs of the more or less unfolded consciousness connected with it. In the educated it is active and well-defined; in the undeveloped it is cloudy and inchoate.

8. Socialism is the ideal state, but it can never be achieved while man is so selfish.

9. Beauty is no dead thing. It is the manifestation of God in nature. There is not one object in nature untouched by man that is not beautiful, for God’s manifestation is beauty. It shines through all His works, and not only in those that may give pleasure to man.

10. There can be no wise politics without thought beforehand.