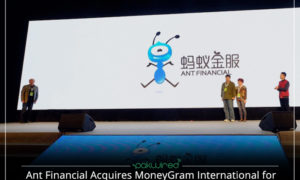 This is Ant’s second U.S. deal after it acquired EyeVerify Inc. a Missouri-based company that is focused on making eye-recognition software. The $880 million acquisition will connect the network of MoneyGram’s 2.4 billion mobile and bank accounts with the customers of Ant Financial.

While commenting on the acquisition in a telephonic interview, Ant’s global operations head Douglas Feagin stated:

“This gives us a very attractive business that’s already quite engaged with a substantial consumer base in the U.S. Remittance is a very important activity and we think this is a great way for us to build a presence around U.S. consumers”

Ant Financial was once a part of Jack Ma’s Alibaba Group. The financial technology firm is now looking to expand its’ wings abroad even though there is massive competition from Tencent Holdings Ltd.’s Wechat payment system domestically. The deal with MoneyGram will further that goal of Ant, following collaborations with Ascend Money in Thailand and Paytm in India recently.

Also Read: Alibaba now claiming offline too, through a $2.6 billion deal with Intime

According to a statement which was released on Thursday, Ant Financial will be offering $13.25 per share in cash. In total, that is close to 11.5% premium to MoneyGram’s last price of $11.88 on Wednesday. It is worth mentioning that Jack Ma’s Ant will continue to operate the company in Dallas under its current brand name.

Since the news is publicized on Thursday, the shares of MoneyGram surged 8.8% to 12.92% in New York trading. Astonishingly, it is the biggest gain in three months since 28th October 2016.

Recently, U.S. President Donald Trump has taken a firm stance on immigration and trade. However, this deal has come at the right time for MoneyGram. Undoubtedly, number of immigrants uses MoneyGram services to send money to their families from the U.S. According to Bloomberg Intelligence, about 10% of the MoneyGram transactions are utilized by Mexicans. Donald Trump drafted a plan last year to cut off the payments that Mexican immigrants living and working in the U.S. send back home.

A Treasury Department agency (the committee on foreign investment in the U.S.) perhaps examines this deal between the two companies. According to legal experts, the deal might probably face more scrutiny than normal especially after Donald Trump’s anti-China bombast.

About Ant Financial and MoneyGram International

Based in China, Ant Financial is currently serving over 450 million customers. It delivers services including wealth management, insurance, credit checks and consumer loans. The financial technology company was valued at $75 billion by Hong Kong investment group CLSA in September. As a result, it is expected to that it will go live this year.

Headquartered in Dallas, MoneyGram International is a money transfer company. It lets customers and businesses send cash to one another. In addition, it generates revenue from transaction fees and spreads on foreign-exchange rates.