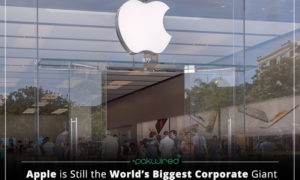 In a recent report put forth at the platform of World Economic Forum (WEF), and prepared by data compilation provided by The Economist, the world’s largest corporations, compiled by market capitalization (the total market value of a company’s outstanding shares) have been identified.

Apple is, by far, the world’s biggest corporate giant. Headquartered in USA, Apple was founded 41 years ago in 1976. The tech giant has close to 70,000 employees.

In this current generation, less than 10% local companies around the globe account profit of 80% and more. According to market capitalization (the total market value of a company’s outstanding shares), these are the world’s largest companies.

If you rewind the picture 10 years back, banks and energy companies conquered the top ten positions. However, the tech companies are holding the positions now with US tech company Apple on the top of the list.

According to the company itself, it is the world’s biggest customer based mobile network. It is the leading services provider in China, and in the Hong Kong Special Administrative Region.

GE goes way back to era of Thomas Edison, producer of the Edison Electric Light Company in 1878. General Electric was also a part of original index in 1896 and is now the only company listed in Dow Jones Industrial Index. GE is called the world’s Digital Industrial Company due to its diversified way of working.

No.8: Johnson and Johnson

Johnson and Johnson is one of the biggest multinational companies to manufacture pharmaceutical goods.

Ever since Amazon started in a garage in 1995, it has seen a spectacular growth. It was once an online bookshop, but now it delivers everything a user needs. Amazon lost $5.7 million when it went out for just 49 minutes last year.

Exxon Mobil, the world’s largest Oil and Gas Company, is a merger of two giant companies, Exxon and Mobil, formed in 1999. It dropped to the fifth number last year after making it to the top.

Berkshire Hathaway is a textile company, the largest company on the list. Partly owned by Warren Buffet, it works in variety of sectors such as utilities, railroads and insurance companies.

Microsoft, the rival of Apple, also started in a garage with just one computer put together by Bill Gates and Paul Allen. Microsoft is one year older than Apple.

Alphabet is a parent company of Google that came into existence two years back. It was founded by the same people who founded Google and it focuses on various sectors such as medical research and wearable technology.

Steve Job, the founder of Apple, built its first ever Apple computer in his parents’ garage. Apple is the world’s most expensive company with net worth of $605 billion. In 2016, it came to stage where it had to struggle back to the top due to its falling sales of the iPhone.

Globalization is the key factor behind the growth such companies. Positively, companies with such growth can revolutionize our society and living standards. Apple’s iPhone bought the era of smartphone that changed our lives with various amazing apps. Smartphones made by such tech companies have now become a core part of ones’ lives.

In order to further improve living standard, many of these companies are investing on research and development. There are free services provided which (Facebook and the search engine Google, for example) you can use.

They also invest to solve worldwide problems. For instance, Facebook’s Aquila invests to provide internet access to all, whereas Johnson and Johnson aim to create Ebola vaccine. In addition, Johnson and Johnson also provided training to socio-workers in African countries to prevent and control Ebola infection.

On the other hand, due to tax-reduction strategies of large multinational companies, it has imposed a bad label on them.