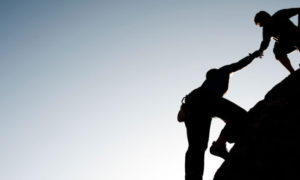 By now everyone knows that having a strong online presence is key to running s successful business these days. An attractive website, regular blog content, active social media accounts; without these things in place, you’re destined to sink into obscurity and oblivion. And since everybody knows it, everybody and their momma is out there blogging and Tweeting and competing for clicks.

With millions of businesses online screaming for attention, how do you distinguish yourself from the crowd?

Well, there’s are countless websites that offer to teach you just that, with a dizzying array of coaching sessions, training courses and webinars. And they can teach you how to write great titles, choose the right keywords, and claw your way up through the search engine rankings. They can teach you marketing strategies, copywriting tips, and how to present yourself like a professional. But ultimately they’re all just teaching you to do exactly what everyone else is doing.

And that’s not gonna help you stand out.

When the Dollar Shave Club launched in March of 2012, they didn’t follow any of the traditional advice. Instead, they announced themselves to the world with a genius video entitled “Our Blades Are F***ing Great.” It’s not politically correct, but it worked like crazy – they had 12,000 new members sign up in the first two days.

I could write a whole article analyzing this one video. It’s funny and irreverent, it’s perfectly suited to the target audience, and it taps into a truly universal experience (paying too much for a name brand). But it’s also personal and relate-able – it stars founder Mike Dubin, not playing a role so much as just being himself, and telling his story. And the phenomenal success of the campaign shows that guys everywhere can identify.

VICE magazine went from being a small publication in Montreal, to a billion dollar international media empire, not by following all the rules, but by turning them upside-down. They reject the typical model of the objective journalist and instead publish content from those who are “on the inside.” They embrace all things underground – no matter how offensive or taboo – covering things no one else dares to cover and giving a voice to those who would otherwise be voiceless.

But the genius of VICE goes way beyond shock journalism and a bad attitude. Their content has an uncommon quality of honesty and humility. They treat their audience as intellectual equals, instead of assuming a superior “we know best” kind of tone. This makes their audience feel more like friends and family, and it has turned millions of counter culture rebels into avid readers and die hard fans.

It’s Cool to Be Weird

You don’t have to be edgy or rebellious to make your mark online. Some of the most successful brands of recent years have been… well, downright nerdy.

Think about the tremendous success of comic-book superheroes on the big screen; like Spiderman, Batman, and Marvel’s Avengers. Or how the Twilight series and Harry Potter were able to capture the imagination of people of all ages. Video games, once the sole occupation of outcast kids, have now become a multi-billion dollar industry.

Now we have companies like ThinkGeek making big bucks off the merchandise. Founded in 1999, the Virginia-based start-up sells such oddball collectibles as a mini-fridge made to look the the Borg ship from Star Trek. They have become one of the top online retailers in America by catering to our franchise obsessions and the eccentricities of internet culture.

And it’s not just their quirky products, everything they do oozes geek – from their social media presence to the tiniest details of their web design. Their mastery of all things nerdy is something that cannot be faked. It can only come from founders and staff who truly eat, sleep, and breathe geek to the core.

Do Your Own Thing

So what does this all mean to you and your business? The point is that those who are truly successful in their branding and marketing are not following the conventional wisdom at all; they are guided by an inner compass. They know who they are and they know what they want. They are willing to take risks, and go against the grain in pursuit of their passion and their vision. They aren’t really trying to be different, they are just being themselves and doing their own thing.

And that is the secret key, that no one else can teach you.

When designing your website, writing your emails and marketing materials, and posting to your social media accounts, always stay true to yourself. Don’t worry so much about what people will like, or what the competition is doing – just show the world who you really are. No matter how hard you try to look professional, to project a polished image, if it isn’t the real you then nobody will buy it.

Sure, you can lure in some customers with gimmicks and manipulation, and sell some products to the most gullible. But there is a world of difference between customers and fans. And if you want to build a really successful company, a really valuable brand, you want fans – people who identify with who you are, who share your ideals, and who will happily recommend you to their friends.

What They Really Want is You

Actually, this principle goes beyond the business world to all aspects of life. Whether you are an entrepreneur trying to grow your following, or one of millions of singles looking for love online – authenticity is key. People might like your image, your public persona, but only on a superficial level. When you really know yourself, what you want and what you stand for, when you put that out there to the world – then you connect with others in a much deeper and more enduring way.

So forget about what other people want, and what they might think. Don’t try to be professional, or project an image. Just be yourself. Whether you are a rebel, a geek or an oddball, you are not alone. There are millions of people out there who feel like you do, who can relate to you, and who will love you and support you if you have the courage to be who you really are.