After waiting four hours to get tickets and negotiating tight security around Lahore’s Gaddafi Stadium, Cyrus Raza Tahir finally made it into the packed stands to watch a rare game of cricket with international players on Pakistani soil.

So great was their desire to watch the March 5 final of the Pakistan Super League, the fast-paced T20 version of the game played in the United Arab Emirates for security reasons, Tahir put aside concerns after Lahore was hit by two explosions last month. Fans were carted into the 25,000-capacity redbrick stadium by special buses as thousands of police were deployed.

“We had to go, there was no two ways about it,” said Tahir, a 31-year-old distribution manager. “It was amazing — I hope PSL moves to Pakistan for good.” 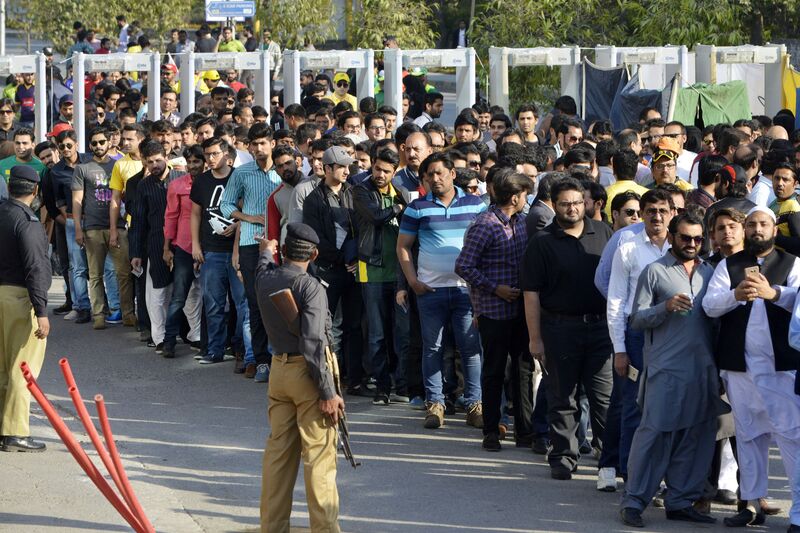 Pakistani spectators queue at one of the entry gate of The Gaddafi Cricket Stadium in Lahore on March 5. Photographer: Arif Ali/AFP via Getty Images

The success of the match was a rare bit of good news for Pakistan’s cricket industry, which has lost millions of dollars in revenue since militants attacked a bus carrying the Sri Lankan cricket team to the same stadium in Lahore eight years ago. Companies including MCB Bank Ltd. and PepsiCo Inc. want to leverage the sport to reach out to fans in the cricket-crazy nation of 200 million people, where Euromonitor International estimates disposable income has more than doubled since 2010.

After successfully hosting the final, Pakistan is hoping to show investors it can safely hold and build a sports industry that’s a fraction of the size of neighboring rival India, home to cricket’s largest market. Only Zimbabwe has played an international match in Pakistan since the attack on the Sri Lankan team. 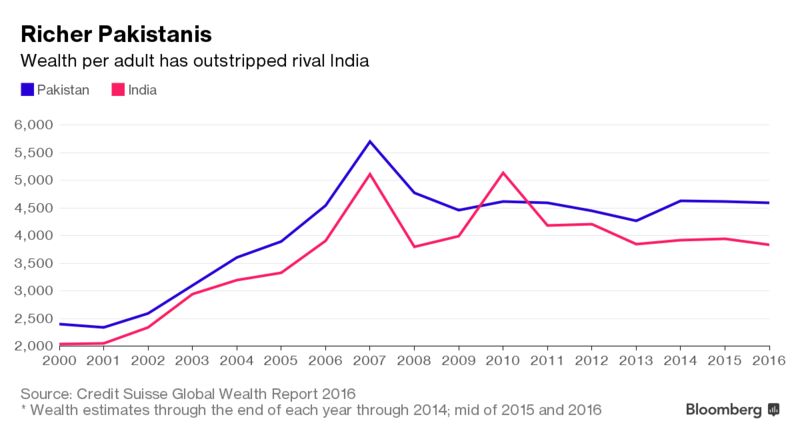 The PSL, which started holding fixtures a year ago, has a market value of up to $300 million, said Arif Habib, a business tycoon and PSL director. That could increase as much as five-fold if more matches were played at home, he said. That compares with London-based Brand Finance’s $3.5 billion valuation of the Indian Premier League. It would also be a positive signal to investors looking at the country’s security climate.

“That will encourage others to come here,” Habib said in an interview in his Karachi office decorated with cricket trophies. “The perception of Pakistan is worse than it really is.”

Introduced to the region during the colonial era by the British East India Company, cricket is the most popular sport in South Asia and is often said to be an obsession.

Pakistani spectators hold placards prior to the start of the final cricket match of the Pakistan Super League (PSL) between Quetta Gladiators and Peshawar Zalmi at The Gaddafi Cricket Stadium in Lahore on March 5, 2017. / AFP PHOTO / AAMIR QURESHI

Pakistan’s household consumption has risen to 80 percent of the nation’s gross domestic product in 2015 from 68 percent in 1990, World Bank data show. That compares with 59 percent in India and a global average of 58 percent.

“There’s tremendous potential,” Shahryar Khan, the chairman of the Pakistan Cricket Board and a former foreign secretary, said in an interview at the stadium. “The whole object of the exercise is to open the doors to foreign teams coming here and feeling relatively safe.”

Pakistan plans to build secure accommodation for international teams, with negotiations underway with Serena Hotels LLC for five-star lodging next to Karachi’s stadium, he said. When asked if there are now plans to bring back international games to Pakistan, the International Cricket Council said its board will consult with security experts and its Pakistan task team next month to decide on future steps.

Yet despite the purchase of bullet-proof vehicles and offers to foreign players of thousands of dollars, many of the international stars, including England’s Kevin Pietersen playing for Quetta Gladiators, refused to travel to Pakistan, where Peshawar Zalmi won the title.

Critics of the cash incentives for overseas players include Imran Khan, the 64-year-old former national cricket captain who led Pakistan to its only world cup victory in 1992.

“They’re offering them huge amounts of money to come to Pakistan, which is not how it should be,” Imran Khan, now head of the nation’s third-largest opposition party and no relation to the PCB’s Shahryar Khan, said in an interview in Islamabad.

The ex-cricket star was also skeptical that security conditions have improved enough to allow more high profile matches, even as fatalities from violence in Pakistan dropped 66 percent from 2014 to 2,610 last year, according to the Islamabad-based Center For Research and Security Studies. “We need more stability,” he said.

Shahryar Khan conceded that Pakistan’s battle with militancy won’t be a quick fix and will possibly hinder the game’s development over the next 30 years.

“Major security concerns mean that international fixtures remain a long way off,” said Finn Dowley, an analyst at Brand Finance. However, “the economic potential attached to international and franchise cricket within the country is huge.”