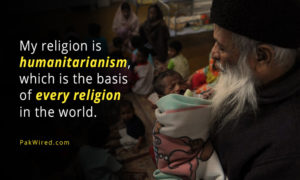 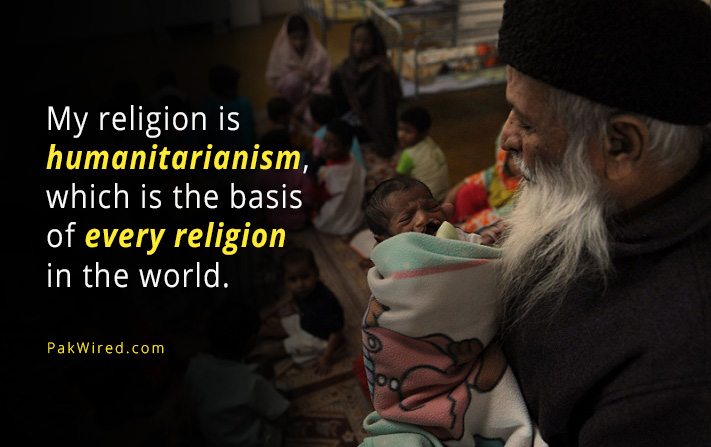 “My religion is humanitarianism, which is the basis of every religion in the world.”

“I do not have any formal education. What use is education when we do not become human beings? My school is the welfare of humanity.”

“Never take anyone’s death to heart Bilquis. Remember God by the equality with which He implements it. Nobody is different, the richest to the poorest, from here to the end of the globe face it equally. What an example of equality.”

“So, many years later there were many who still complained and questioned, ‘Why must you pick up Christians and Hindus in your ambulance?’ And I was saying, ‘Because the ambulance is more Muslim than you’.”

“Empty words and long praises do not impress God. Show Him your faith by your deeds.”

“Chasing after desires creates inner turmoil. When the devil becomes guide, dacoits and gangsters are manufactured. He makes men fight against their souls to survive expensive items and most lose everything in the face of his strength. The internal enemy can only be overcome by a personal revolution.”

“The dead has only one place to go… up. Wherever you bury them, they will go the same way, up.”

“The Holy Book should open in your souls, not on your laps. Open your heart and see God’s people. In their plight you will find Him.”

“Those who believed in changing the world were either hungry by circumstance or practiced deprivation by choice.”

“Appearance is a distraction, surrendering it develops truth and humility in abundance.”