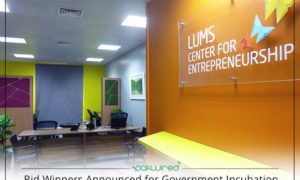 Islamabad is already having an ICT R&D approved incubation setup for up and coming businesses. Now Lahore, Karachi and Peshawar have joined the list with an approved and funded incubation center each.

Details of the Bid Winners from Three Major Cities

The three bid winners from the respective cities are as

Minister of State for IT & Telecom Ms Anusha Rehman was also present at the concluding bidding ceremony. She has been of the opinion that incubation centers will go a long way in helping the youth achieve opportunities. The incubation centers have the ability to help youngsters become entrepreneurs and have access to a reasonable livelihood.

She also stated that the government attaches highest priority to ICTs development to materialize Prime Minister’s​ vision of “Accelerated Digitization”. The minister also told the company to speed up the efforts so that there can be as many as seven incubation centers in the country.

What is the Role of Modern Day Incubation Centers?

The Incubation Centers have become a global phenomenon with the success of Silicon Valley. These small setups help new entrepreneurs who have good business ideas but lack the resources to start their own business all by their own finances. At a percentage cut, the incubation centers offer these new entrepreneurs infrastructure and technical facilities.