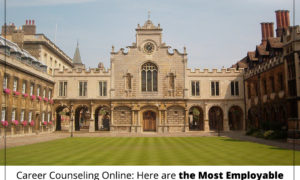 You might have spent a lifetime investing in your studies- is it really a surprise when we’re all in an age where most people believe that the sign of a fulfilled life is a sound career? However, even after all that struggle and all the hustle, sometimes fortune doesn’t seem to favor us unless we have the right institute names on our degrees. Hence, for all you students out there considering higher education, we share here the World Economic Forum’s Top 10 Employable Universities as suggested by the Times Higher Education in their report Global University Employability Ranking 2016. This global employability ranking reveals which universities the recruiters at top companies think are the best at preparing students for the workplace.

This ranking was derived after gathering data from top 150 universities from across 34 countries. 2500 hundred graduates from these universities working in 20 developed countries were then interviewed to shortlist which universities had produced the highest number of employable individuals.

This year, universities in the United States of America dominated the list by securing no less than six positions in the coveted list, three of which were the ones on the very top.

Apart from the universities from the United States, the United Kingdom was able to secure two positions on the list whilst Germany and Japan both managed to score a position each.

When we go further down the list, we see a bit more international diversity as French, Canada, China and Singapore show up in the Top20 positions as well.

Most of the universities in the Top5 position are well-known to have contacts in the industries they specialize in, which helps them to maintain an entrepreneurial atmosphere that helps their students perform well in the professional environments.

Apart from these, the universities from other countries which appeared on the list make it a priority to make professional field-work a part of their degree programmes which helps students prepare for stepping into the professional world more actively.