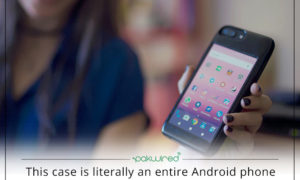 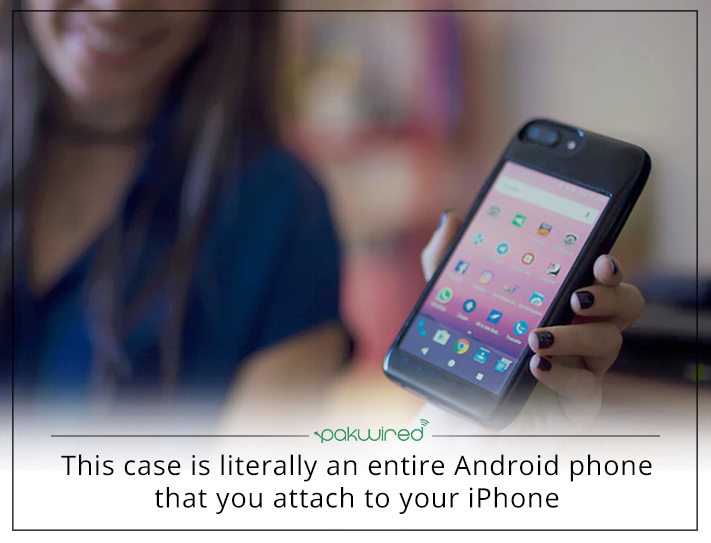 Getting Android to run on iOS is one of the ultimate achievements for hacking, as the locked-down nature of Apple’s platform makes that extremely hard to do. The Eye is an iPhone case seeking funding on Kickstarter that looks to be the next contender for running iOS and Android on one device, by taking the somewhat obvious approach of simply attaching an entire Android phone to the back.

The end result is a strange Franken-phone, where one side is an iPhone, the other an Android device. Eye shares the speaker, microphone, and cameras of Apple’s device, but otherwise the case is a fully functional standalone device. It’s got two SIM card slots, is expandable by microSD cards, has a 3.5mm headphone jack and IR blaster, and contains its own separate battery and NFC chip. Oh, and it’s got its own screen, a 5-inch AMOLED display. And if this is starting to sound like a spec sheet for an actual Android phone, that’s because it basically is an Android phone.

This isn’t running Android on an iPhone. This is duct-taping an Android phone to the back of your iPhone. Sure, it adds some interesting features, but nothing that a regular full-fledged Android phone wouldn’t provide. And while Esti Inc. has yet to comment on what kind of internal specs the Eye will have, given the $189 price point (which is the cheaper version without cellular connectivity), it’s hard to imagine that Eye will offer a super-powerful Android experience. From a purely technological perspective of cramming an entire phone into a case, Eye is interesting, but I’m left wondering: why?

Additionally, Esti Inc. is a first-time company who has never actually shipped a product before, which is worth keeping in mind when deciding to back, especially given the many promises the company is making when it comes to Eye’s functionality.

Eye is available to back on Kickstarter for an early-bird price of $95 (without 4G) or $129 (with 4G). Esti Inc. hopes to ship to backers in August or September later this year.