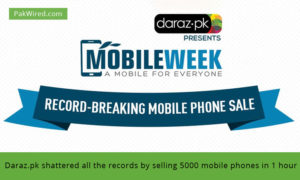 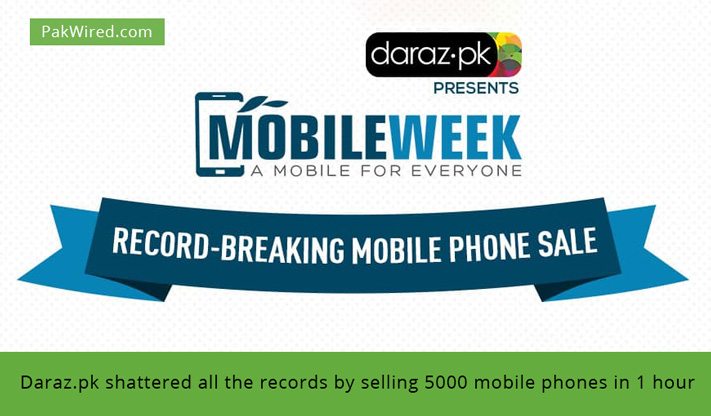 On the midnight of 20th June 2016, Daraz.pk along with Easypay launched and went online to bring the hottest smartphone deals in the mobile week. However, according to Daraz.pk, all the records were shattered and broken during Daraz.pk mobile week sale.

The company claims to have sold over 5000 smartphones within first 60 minutes of the sale and subsequently creating a national record as there isn’t any e-commerce website or online store that has so far claimed to have sold that many units in one hour.

According to an Infographic that was shared by Daraz for the mobile week sale, it was mentioned that the company received over 2 million visits during the entire sale week on the website. Moreover, not only double, triple or quadruple but 21 times more phone orders were placed on a single day as compared to a normal shopping day.

There was plenty abuzz among the people before the launch of the mobile week sale as they have experienced some unbelievable discounts when Daraz.pk last year launched the same kind of sale. As soon as the website started their mobile week, there was a flood of people on the website because everyone wanted to avail the best possible deal.

“At midnight, as we celebrated leading to the countdown, we knew that this would be a sale as big as Black Friday and we were very excited to bring another revolutionary sale event to our customers. The hype for Mobile Week had been building much before the sale began, and once the deals were revealed the vibe went from electric to ecstatic”

The statistics also revealed 67% of the visits on the website were made only for mobiles. While shoppers enjoyed unreal discounts on various brands, they were collectively offered a discount worth Rs. 14.3 million during mobile week sale.

110 times more calls and 150 times more emails were being answered during the entire week. Furthermore, 62% of the orders were dispatched and delivered within first 2 days.

QMobile, General Mobile 4G, Samsung, Infinix, Huawie are some of the brands that were simply adored by the people of Pakistan. It could be fairly said that the sale of these brands’ products were massive.

Daraz.pk collaboration with Easypay as a payment solution was an epic hit once again as 55 times more people opted for Easypay debit/credit card option compared to a regular day. This was a clear demonstration of more reliance and trust in online shopping.

According to the company, the hottest launch during the entire sale week was General Mobile 4G whereas Samsung S7 was sold out within the first hour of the sale week. Primarily the main reason was that the company offered Rs. 20,000/- discount on the handset and essentially it proved to be a hot cake, understandably so.

Daraz.pk promises to be back again next year (or who know they might end up coming later this year) with an even bigger and better mobile week.

Moreover, the staff of Daraz.pk were working day in and day out for the successful execution of the mobile week sale. They had their Sehri and Iftari at the office along with a dozen cup of coffees with a very little sleep.

You could also have a crack at the following Infographic that was shared by Daraz.pk regarding the mobile week sale: