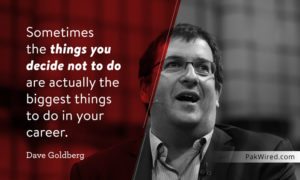 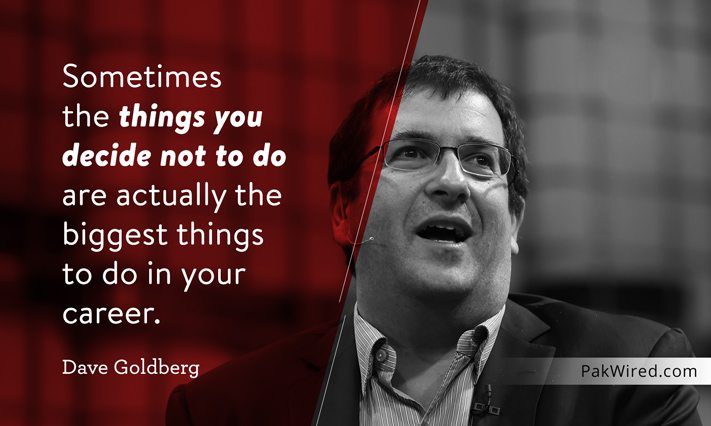 David Bruce “Dave” Goldberg (October 2, 1967 – May 1, 2015) was an American management consultant and businessman. He was the founder of LAUNCH Media and the CEO of SurveyMonkey. He was married to Sheryl Sandberg, COO of Facebook.

Goldberg worked for Bain & Company for two years after graduating from college. He had planned to attend law school but instead joined Capitol Records, where he served as director of marketing strategy and new business development. He founded LAUNCH Media in 1994, and led it through its acquisition by Yahoo Inc. in 2001. He quit Yahoo in 2007 and joined Benchmark Capital. He then joined SurveyMonkey in 2009.

Below are 10 quotes to honor Dave Goldberg on his birthday – collected via Brainy Quote.

1. If you use your old business models to restrict people, they’re going to find ways to get that content the way they want it.

2. For me, going home at 5:30 is as much about my own choices, but also giving my team those choices, too.

3. In general, you don’t want competitors to understand your business outside of telling people your revenue and profitability numbers.

4. Sometimes the things you decide not to do are actually the biggest things to do in your career.

5. If you’re an entrepreneur and you’re starting a company, I think the first thing you do is you go and talk to a bunch of people. But then the next thing you probably should do is figure out if there’s a broader demand than just people you know. That’s where I think SurveyMonkey is pretty valuable to people.

6.  You want to hire great people and give them the opportunity to fail. You need to let them figure things out as they go along. If they fail repeatedly, then you probably have to find a different person, but if you don’t let people have that opportunity to fail, they don’t get to learn and grow and try things.

7. When you’re friends with someone, you can’t just go out to dinner and say ‘O.K., now this is a date.’ You’ve got to do something very different.

9. Most of what we’ve done at SurveyMonkey is create a market, which I would say is much harder than trying to enter a market that already exists. But if you get it right, it can become a great business.

10. My closest adviser is my wife. It’s nice to have one of the smartest people in business as your life partner, and someone you have dinner with and breakfast with.