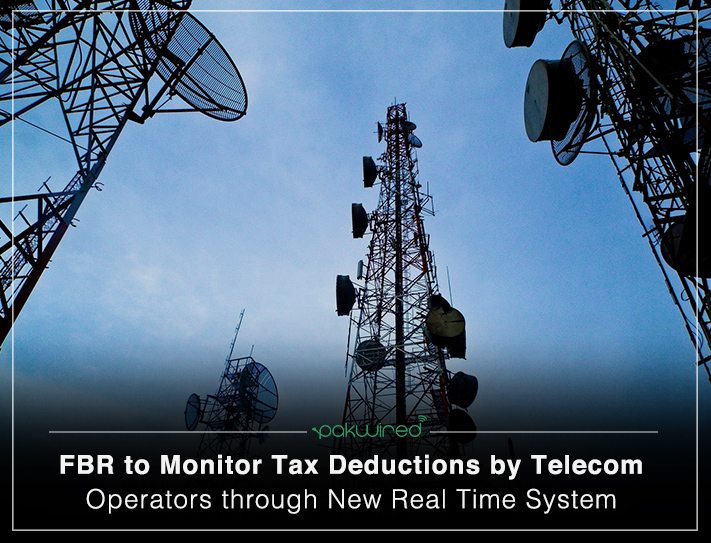 The Federal Board of Revenue (FBR) has devised a new system for cellular companies through which they can manage the collection of withholding tax from their customers. This will be done through an online data integration system which shall be provided to all mobile operators.

Senior FBR authorities said that the tax authorities have chosen to initiate the procedure for building online withholding data integration with all cellular organizations at the same time to guarantee accuracy in the collection of taxes from cellular customers.

“The FBR has decided to launch a pilot project for real-time connectivity from January 17 to ensure precision in the count of taxes collected from phone users.”

The board met with Shahi Syed heading the Committee on Thursday. The committee’s aim was to share knowledge about the system devised by FBR and PTA (Pakistan Telecommunication Authority) concerning the collection of WHT (withholding tax) and GST (general sales tax) taxes from the cell phone users.

Many questions were raised in the committee about the execution of the mechanism and the procedural details of tax collection from the mobile users and deposit in the national exchequer.

The chairman of the committee highlighted the significance of the issue whereby billions of rupees are being gathered by virtue of GST, WHT and service charges from cellphone users, even from people who don’t fall under the tax network. Tragically, the FBR has still no component to break down the information of expenses gathered by telco’s. As a result, the FBR has neglected to give alleviation to the basic man.

The Committee found this a serious issue and advised that legislation may be brought in the Parliament in light of the issue. The FBR also thought of it as a policy issue and accepted the idea of legislation for the matter.

According to the FBR authorities, an amount of Rs. 47 billion was gathered as WHT from subscribers and Rs. 14 billion out of it were adjusted. Notwithstanding, the administrator said that the sum is assessed to be humongous. He additionally said that telecom organizations are gathering an expected measure of Rs. 81 billion annually from users in the name of services and maintenance which is nowhere to be found.

The FBR officials informed the committee that they have established a system through which they can record the exact amount of tax collected from the consumers. FBR officials said that they have designed the system with the help of PRAL (Pakistan Revenue Automation Pvt Ltd).

With the help of this system, FBR will be able to keep an eye on the collection of taxes and in this way, no additional tax will be taken from cell users. For this purpose, another project which will support real-time connectivity will be launched. The work on this project will start on 17th January 2017.

The cellular operators were asked by Senator Rehman Malik to give data of details and figure collected in the name of withholding tax from cell phone users and the system which they are using to return the same to them. In a period of 4-5 months, a detailed report will be submitted to the Senator, said the FBR officials as they are working in developing a mechanism to do so.

The committee also requested to be provided a detailed report on Sales Tax/FED lodged by the telecommunication companies into the treasure of the government of the Federation as well as all other provinces, amid the most recent three years.