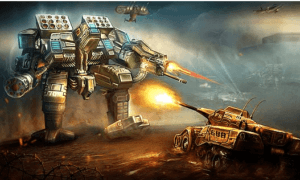 Fans of battle scenario games will love War Inc., the latest offering from Mindstorm Studios. Launched recently, and available for free on both the Apple App Store, and the Google Play Store, the game is graphics heavy with thrilling gameplay.

As the name suggests, the game revolves around creating and training troops while building a base (and an economy for it). The tutorial takes you through the basics of gameplay. Here is how the developer described it on the App Store.

Command your forces to victory in this epic war strategy game! Deploy powerful towers, create an advanced military force, and conquer your enemies as you clash in battle against thousands of players!

War Inc. is a modern military strategy game with a stunningly detailed combat system, immersive battle gameplay, intelligent army units, and in-depth strategy that will keep you planning, playing, and outwitting your opponents at every turn. Build an army of fast-paced modern Marines and Snipers, or command heavy Mechs, Scorpion Tanks, and Walkers to reduce your enemy’s base to rubble! Do you have what it takes to conquer the War Corp ranks and rise to glory as you clash against your foes? Form army alliances, capture enemy bases, command your troops, and build powerful weapons on you way to global domination!

The game starts off with a tutorial, so you’re guided through the basics for the first few minutes as you complete your first mission. This is extremely helpful, as there is a lot going on and it would be easy to get confused otherwise. There is one priority: taking down your enemy. You do this by setting up revenue generating oil rigs, creating soldiers, buying the best weapons, and then bringing down the wrath on your enemy’s base. Simple enough.

If you have a phone with limited memory, I’d suggest clearing some out for the game. The graphics, sounds, and stunning visuals mean that the game will take up a bit of space (83 MB+), and it can be slow to load and start.

The #1 gripe in reviews is the cost of in-app purchases. Monetization for free games is important, and in-app purchases is a big source of revenue, especially if the game is addictive enough to keep people coming back for more. Here are the top 5 in-app purchases (as determined by the App Store)

The reviews have been mostly positive. As with any new games there are a few issues in gameplay which the team has stayed on top of. Most of the other complaints revolved around the costly in-app purchases (which are part and parcel of any free app).

Mindstorm Studios was started in 2006, and has developed many successful games since then. They’re the people behind Cricket Revolution, Wacksy Taxi, Mafia Farm and Kingdom of Heroes. The team is passionate about creating unique gaming experiences, and are working on delivering even more addictive games in the future.

App Store: Available for iPhone, iPad, and iPod touch. This app is optimized for iPhone 5. The game is rated 9+ on the App Store due to the mild violence.