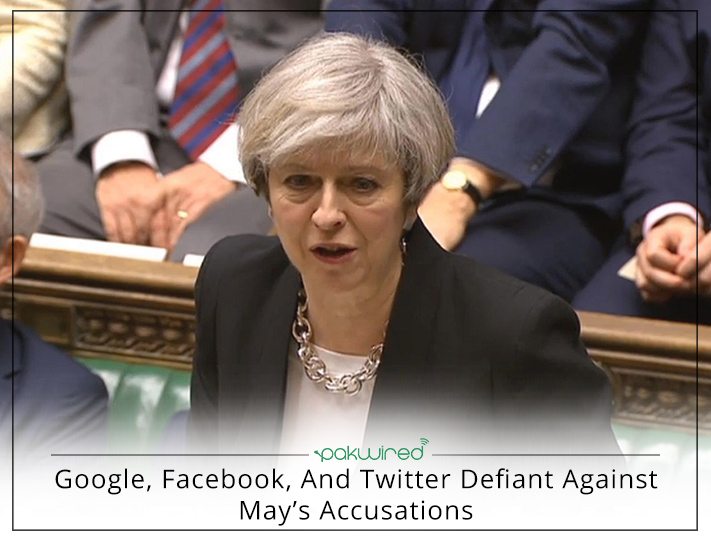 Tech Giants Google, Facebook, and Twitter have remained defiant in the face of accusations from UK Premiere Theresa May. May had earlier spoken that very little is done by tech companies to stamp out the extremist content available online. The statement was made in the wake of brutal terror attacks in London that left seven people dead and several dozen more injured.

Speaking after the attacks, the Prime Minister said that new international agreements should be introduced to regulate the internet. She emphasized on the need to create a better internet and “deprive the extremists of their safe spaces online”. She had concluded her argument on the line that technology firms were currently not doing enough.

As soon as the statement was made some of the biggest firms in tech sector were quick to defend their efforts. Simon Milner, director of policy at Facebook, came out with a statement, saying:

“Using a combination of technology and human review, we work aggressively to remove terrorist content from our platform as soon as we become aware of it — and if we become aware of an emergency involving imminent harm to someone’s safety, we notify law enforcement”.

Google spokesperson said the company is  “already working with industry colleagues on an international forum to accelerate and strengthen our existing work in this area”. The spokesperson further added:

“We employ thousands of people and invest hundreds of millions of pounds to fight abuse on our platforms and ensure we are part of the solution to addressing these challenges”.

Twitter maintained that the platform continues “to expand the use of technology as part of a systematic approach to removing this type of content”. Twitter’s UK head of public policy, Nick Pickles said:

“We will never stop working to stay one step ahead and will continue to engage with our partners across industry, Government, civil society and academia.”

Twitter’s transparency report showed between July and December 2016, almost 400,000 accounts have been suspended for violations related to promotion of terrorism

The Conservative manifesto pledges to regulate the internet including forcing providers to actively participate in counter-extremism measures. The public announcement from Ms May, however, is the first open mention of such measure in mass media.