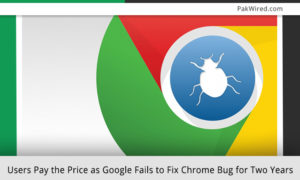 Google chrome is cross-platform web browser know for its super-fast speed and brilliant features. It is also considered as one of the most secured web browsers created by search engine giant Google.

A bug found in Chrome:

Sophos, a security software and hardware company, based in the US, recently revealed that a group of scammers actively targeting Google chrome users. These hackers have introduced a bug in chrome that poses as Microsoft tech support and displays a message that says “your computer is infected with virus”. Google knows about this scam for two years and there is nothing being done about it.

How scammers deceive a Chrome user?

Their main target is to draw victims’ bank accounts by making it appear that they are providing a technical support service. So far they are doing shockingly well. According to the investigation carried out by Microsoft, 1 in 5 users targeted by tech scammers ends up paying some money.

How Google reacts to Hackers’ attacks?

Even though the risk for an average user is apparently low, Google still has a responsibility to make chrome safer and securer browser with a considerable focus on security and privacy. Google is however aware of the issue but ignores it for almost two years. Although the company has a proven track record when it comes to privacy and security, but this time it appears to have dropped the ball.

Conflict of Google with Microsoft:

Recently, Google spotted the flaw in Windows and immediately informed it to Microsoft. Microsoft didn’t respond to Google’s request. After waiting for few days, as per company policy, Google revealed the information to the world.