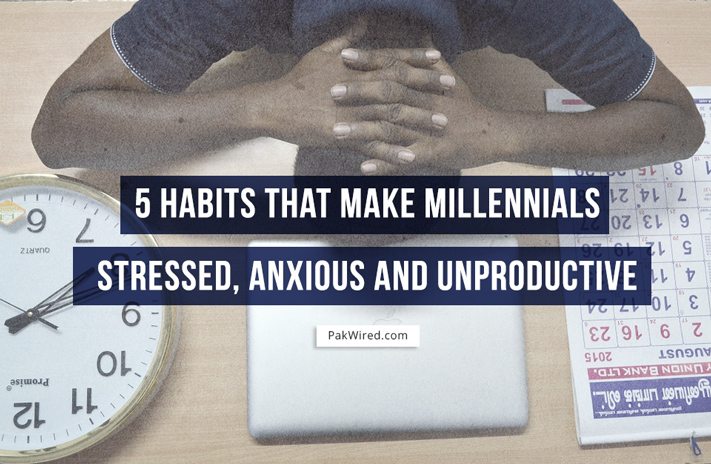 According to a recent study conducted by the American Psychological Association, APA, Millennials suffer from more stress and are less likely to be able to manage it as compared to any generation that came previously.

According to the report, 12% of Millennials have been diagnosed with some sort of anxiety-related disorder. This percentage is almost twice the amount as compared to the previous generation of boomers.

According to other non-official sources, anxiety affects 30% of the millennial working class and an even more alarmingly staggering 61% of the college population.

Anxiety is a disorder that not only affects a person’s well-being but also hinders their performance in almost every aspect of their life. An assessment conducted by the American College Health Association (ACHA) found that stress and anxiety were the two major factors taking a toll on both students’ health as well as their performance regarding many various tasks.

Even though it is constantly argued that many millennials suffer from anxiety due to a tough job market, student debt and many psychological pressures such as an overload of choices and career crises, it is now being observed that many Millennial day-to-day habits cause them to suffer from major anxiety and thus sabotage their own mental health at the end of the day. Here are the top 5 habits that are contributing to this complicated and worrisome situation:

Bad Sleeping Habits are perhaps some of the biggest contributors to anxiety in people all across the world. Unfortunately, this habit is deeply rooted in the millennial generation. Lack of sleep triggers the parts of the brain that contribute to excessive worrying. This is why millennials are also being referred to as ‘the worrisome generation’.

Lack of sleep results due to a number of factors such as going to bed at different timings, not making sleep a priority and spending excessive amounts of time on a laptop or mobile phone right before bed.

A body needs food like a car needs fuel. And while millennial’s cars might not be facing anxiety, they certainly are. Eating at regular intervals helps regulate both the metabolism as well as insulin levels in the blood. Not eating regularly, going hungry for extended periods of time or not eating according to the body’s requirements are some of the reasons why many youngsters today are facing anxiety-like symptoms on a daily basis. These include dizziness, confusion as well as difficulty in communicating.

Caffeine is like a jolt of energy for the body. When taken in small doses with regular intervals in between, it helps a person stay alert, awake and even helps them perform better on some tasks. However, caffeine can also contribute towards making a person irritable, jittery and nervous, especially if they have a history of dealing with anxiety. Caffeine has also been known to act as a trigger for people who suffer from panic attacks. Apart from this, it also leads the body towards dehydration-another leading contributor towards anxiety.

Technology is a blessing. There is no difference of opinion over the fact that technology has certainly made our lives much easier. However, spending excessive amounts of time in front of a screen is something that is contributing to anxiety for many people. According to various studies, screen-based entertainment causes nervous system arousal which also helps to increase anxiety amongst various people. Apart from this, spending excessive amounts of time on social media helps contribute towards depression and feelings of inadequacy.

Millennials are being deemed to be one of the most hard-working generations across the board. However, this is taking a definite toll on their health. According to a study conducted by FORBES’, millennials live in a constant state of paradox: getting irritated when work interferes with their personal life and then getting anxious and feeling guilty when they’re not working. This constant state of just thinking about work is also contributing to their levels of anxiety. This is due to the fact that millennials treat work as a ‘thing’ and not as a ‘place’ that they can leave after they’re finished. Hence, by taking their work home with them, they take along the anxiety and stress that come with the job back home as well.