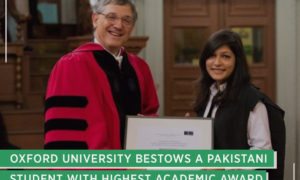 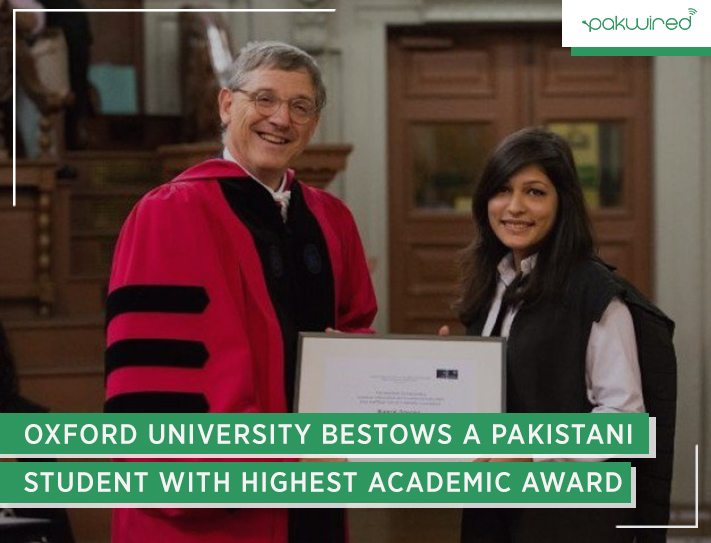 An MBA student from Pakistan, Kanza Azeemi, has been conferred with the highest academic award from the Oxford University, UK. The Dean of Saïd Business School at the University, Peter Tufano, presented her the award in a prestigious ceremony held at Sheldon Theatre.

Also Read: Child prodigy – 16 year old self taught coder you can learn from

Kanza managed to secure the top position out of a pool of 327 students from 58 different countries across the world. According to a press release, Kanza has been awarded with the highest academic award, Saïd Prize, upon her successful completion of MBA degree in an illustrious manner, from the reputed Saïd Business School at the Oxford University.

While addressing the audience, Professor Peter Tufano spoke about the events which Kanza organized. Moreover, he also acknowledged her position on the Dean’s Honor List. In addition, the young talented student has also been nominated as the Co-Chair of the Women’s Leadership Oxford Business Network. Her role in this capacity shall be to promote gender equality besides supporting women in holding leadership positions.

Saïd Prize is presented every year to the most outstanding student of the graduating batch for their incredible academic and extra-curricular activities. Kanza Azeemi, a Pakistani prodigy, has been chosen this year for the award for her exceptional record.

Quick Read: 23 US and Pakistani universities to join hands on various research and academic projects

A graduate from the Lahore University of Management Sciences (LUMS), Kanza secured distinction in 2013 with a major in Economics. Since then, she has been actively involved in women’s empowerment and social impact initiatives.

She worked as an Area Sales Manager at Reckitt Benckiser for 4 months from March 2014 to June 2014. Thereafter, she founded Elika Studio and led for good couple of years. She is currently working as a Senior Consultant at Monitor Deloitte in Dubai.