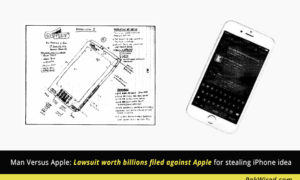 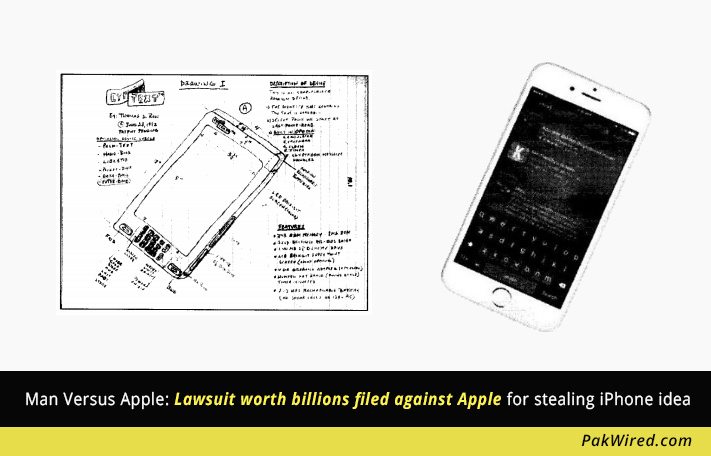 Lawsuits are not extraordinary for large corporations as they deal with countless stakeholders on a daily basis but this one is indeed interesting; a Florida based man has filed an unimaginable suit against Apple worth billions for stealing the ever famous idea of iPhone.

Thomas Ross, a businessman, has taken the IT industry by surprise with his optimism as he is claiming for USD 10 billion for stealing his idea of ‘Electronic Reading Device’ (ERD) and he claims that the current version of iPhone is the core essence of his device.

He sketched a few drawings back in 1992 where he started working on the idea for more than one year as he claims it was be his first and last invention during his experience as a software consultant. Later he filed for a patent during end of that year but got rejected due to lack of funds to pay the fees.

Being a software consultant, one fine day while reading books Ross thought of a device which culminates various functions. It would be something that you could carry around for many different uses. It was initially thought of as a gadget whose primary function was to serve as a reading and writing device with media and cellular role as well.

Thomas planned this device 15 years before iPhone came in the market and 4 years before the Palm Pilot was launched. According to the details given to court by Ross, his device would “allow one to read stories, novels, news articles as well as look at pictures, watch video presentations, or even movies, on a flat touchscreen”.

Additionally the details also included modem and communication functions along with round edges which is the unique selling point of a typical iPhone. Moreover, he also claimed to have a flowchart along with his three hand sketched drawings, where the work flow of how media could be used in his ERD is described. There was a description of the outlook of the device.

Unfortunately for him and fortunately for the tech giant, Ross’s idea never really materialized more than mere drawings which he claims was due to lack of investment. Although he did file for a patent in 1992 but his inability to pay the required fees resulted into abandonment of his application by US Patent and Trademark Office (USPTO).

He has also referred to the bold statement given by the inspirational leader of Apple, Steve Jobs who once said that his company is, “shameless about stealing great ideas”.

Will Apple Succumb to this lawsuit?

Apple really got into mess in early 2015 when its current CEO Tom Cook received a formal complaint from Ross’s lawyer asking the company to stop the distribution of its products. The company however, did not pay any heed to this bullish plead as their legal advisor responded to this by denying any such act and saying that the company believes this issue has no legitimacy. Apple also suggested that there was no concrete evidence that Apple has copied his idea.

The company’s legal adviser, Jeffery Lasker stated, “Additionally, based on our review of the materials you provided, we do not believe there is any similarity between Apple’s products and Mr Ross’s applications,” adding further he said, “He doesn’t even have a US patent. He just has some copyrights for some childish hand drawings”. Another Florida based patent lawyer also commented, “It’s pretty clear that this is just a nuisance case filed by an individual who maybe thought he could make some money out of it, but clearly doesn’t know what he’s doing.”

Despite the odds Thomas Ross didn’t budge from his stance as he took his plead ahead by filing a Lawsuit with Southern District Court during June where he claimed for damages worth USD 11 billion, along with USD 10 billion in restitution and 1.5% of Apple’s worldwide gross sales as a royalty. These whopping numbers would give sweats to any organization if the lawsuit has any merit whatsoever.

Whatever the case Ross seems undeterred so far as he quoted:

“I am just one person going up against the resources and power of Apple, the biggest corporation in the world. But what’s right is right. I’m against some very esteemed and well-known attorneys. They know what they’re doing. I am very confident. I believe in what I did. In spite of the odds I feel that I have a shot at it”

Well we hope things get sorted out for the tech giant as any lawsuit puts pressure on the organization’s image and stock price to some extent. We wish luck for Thomas in his great battle against the world.