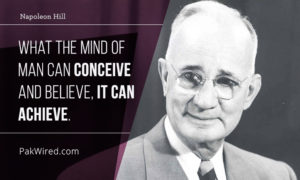 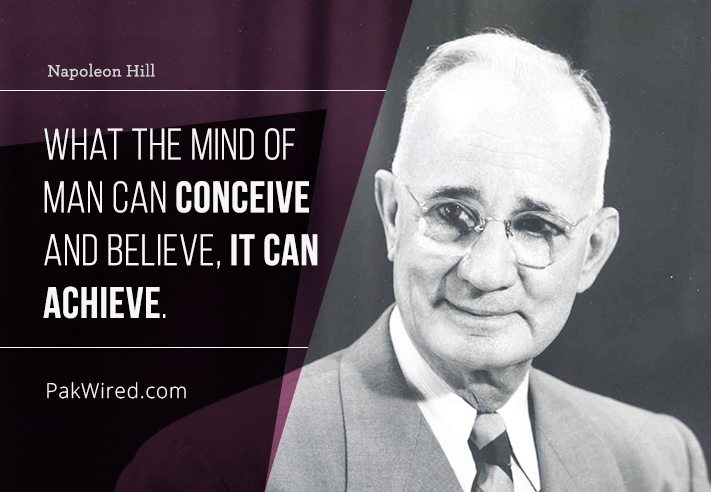 Napoleon Hill (October 26, 1883 – November 8, 1970) was an American author and impresario from the new thought tradition of the previous century to become an early producer of personal-success literature. At the time of Hill’s death in 1970, his best-known work, Think and Grow Rich (1937) had sold 20 million copies. Hill’s works insisted that fervid expectations are essential to increasing one’s income. Most of his books were promoted as expositing principles to achieve “success”. Hill was an advisor to two presidents of the United States of America, Woodrow Wilson and Franklin Delano Roosevelt.

Here are some of Hill’s most famous quotes on creating your reality. We hope you enjoy them!

1. Desire is the starting point of all achievement, not a hope, not a wish, but a keen pulsating desire which transcends everything.

2. Strength and growth come only through continuous effort and struggle.

3. Think twice before you speak, because your words and influence will plant the seed of either success or failure in the mind of another.

4. A goal is a dream with a deadline.

5. Don’t wait. The time will never be just right.

6. First comes thought; then organization of that thought, into ideas and plans; then transformation of those plans into reality. The beginning, as you will observe, is in your imagination.

7. If you cannot do great things, do small things in a great way.

8. Your big opportunity may be right where you are now.

9. Patience, persistence and perspiration make an unbeatable combination for success.

10. Effort only fully releases its reward after a person refuses to quit.

11. Procrastination is the bad habit of putting of until the day after tomorrow what should have been done the day before yesterday.

12. Any idea, plan, or purpose may be placed in the mind through repetition of thought.

13. If you do not conquer self, you will be conquered by self.

14. It takes half your life before you discover life is a do-it-yourself project.

15. Wise men, when in doubt whether to speak or to keep quiet, give themselves the benefit of the doubt, and remain silent.

16. When your desires are strong enough you will appear to possess superhuman powers to achieve.

17. Action is the real measure of intelligence.

18. Edison failed 10,000 times before he made the electric light. Do not be discouraged if you fail a few times.

19. Money without brains is always dangerous.

22. No man is ever whipped until he quits in his own mind.

23. Just as our eyes need light in order to see, our minds need ideas in order to conceive.

24. What the mind of man can conceive and believe, it can achieve.

25. The ladder of success is never crowded at the top.