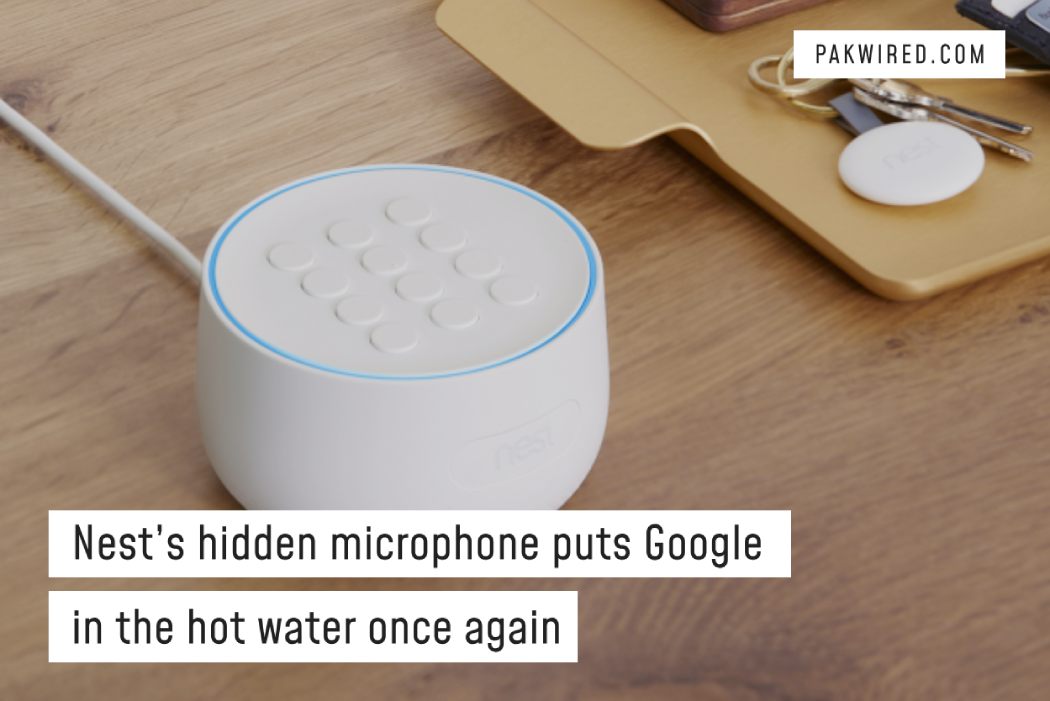 Google’s Nest Secure hub, the Nest Guard has a built-in microphone that no one knew about. What!?

Okay! Chill! Everything is fine.

In a blog post earlier this month, Google announced Google Assistant’s appearance to Nest Secure’s home security hub. The announcement surged excitement because now users can ask Google assistant for information like weather, news or traffic. The blog post did not identify that gadget comes with a microphone, why? nobody cared, and hence the news wasn’t made clear to the users.

Later on Tuesday, in a statement issued to Business Insider, Google admitted the omission of the microphone from the tech specs was a mistake.

“The on-device microphone was never intended to be a secret and should have been listed in the tech specs,” the person said. “That was an error on our part.”

In another email to CNET, Google spokesperson said, “The on-device microphone was never intended to be a secret and should have been listed in the tech specs. That was an error on our part. The microphone has never been on and is only activated when users specifically enable the option,”

In Google’s defense, the microphone on the device is not enabled by default and can only be activated with the permission of the user to turn it on. Google mentions that the need for the microphone was to potentially offer users additional features like detection of a false alarm, break-in or to detect broken glass.

Twitter shared their concerns over the possible privacy issue and called out Google for not being open about the microphone in the tech specs.

Google: Nest Secure is getting an update. You can now use Nest Guard as a Google Assistant speaker.

Google: Oops. Looks like we forgot to tell you that there’s a microphone. Our bad. It’s never been on though. Trust us.

No product should ever come with a secret microphone, regardless of whether or not it’s enabled. That’s just bad security design, @Nest. https://t.co/ofnobIfjEY

After the reactions, Business Insider reported it first and took a statement from Google.

What made this news even more sensitive and prone to the reaction? It is because of the series of past incidents that have happened. Last month, Google confirmed a bug that impacted some of its Nest security indoor and outdoor cameras. The vulnerability caused the cameras to access the live view mode automatically. The issue got fixed immediately but was reported and created chaos among the users.

In other news, a hacker once took over the camera of a user based in Phoenix, Arizona and warned him about the security issues involved with the device. A similar case also happened where a couple reported that a hacker got in touch through the device and told them that he will kidnap their child.

On privacy issues, It also brings back an incident from 2010 where the company acknowledged that its fleet of Street View cars “accidentally” collected personal data transmitted over consumers’ unsecured WiFi networks, including emails.

The past few months. discussions of privacy following recent scandals and revelations became a hot topic. Users are particularly panicking about how tech companies are collecting, selling or using their data for different behavioral profiling and other reasons. This case gave them all more reasons to be concerned.

About Nest: In 2014, Google bought Nest for $3.2 billion. The startup founded by former Apple hardware czar, Tony Fadell, brought smart home devices to the limelight. Nest became semi-independent division after Google remarked itself as Alphabet but it recently rejoined Google last year when the company was making bigger plans for smart home products.