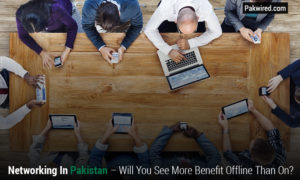 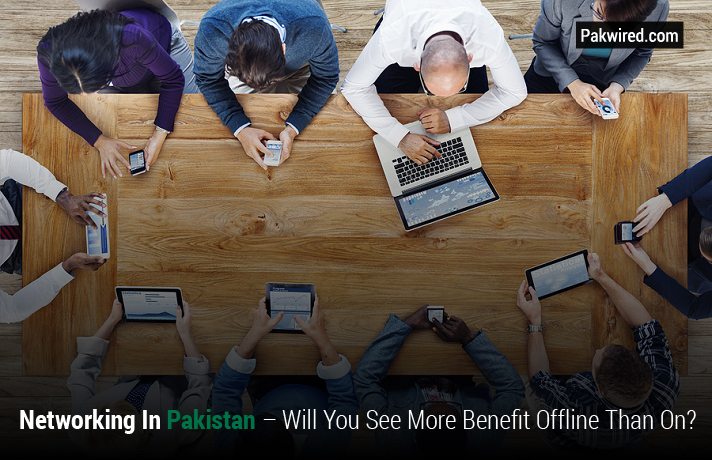 There’s a popular phrase in the world of business that says “It’s not what you know, but who you know”.

Leaving some people thinking success has very little to do with the skills you have or the product you offer, this isn’t actually the case.  As with anything, you need great foundations to succeed, but there’s little doubt knowing the right people can move things along when you’re looking to see success on any level.

And because of this, network plays – and has always played – a vital role in business.

From attending local meetings through to engaging with colleagues from right around the world on the likes of LinkedIn, it’s obvious that the more people you know, the more chance there is of you seeing success.

But using the instances above as examples, as a business in Pakistan, is it worth your while investing more time in offline networking or its online counterpart?  Is it better to have relationships with local business people or those on the other side of the world?

In many ways, networking online has become the default option for many today.  The likes of social network Twitter and the dedicated networking channel of LinkedIn have meant it’s become easier than ever to engage and interact with people in your industry.

And there’s little doubt this is fantastic.  In the not so distant past, to be able to introduce yourself to someone on the other side of the world would have meant letters, phone calls and expensive travel.

But how much value actually is there for Pakistani businesses in digital networking?

Look at LinkedIn as an example.  18 months ago, LinkedIn had a reported two million users in Pakistan, compared to statistics explaining the vast majority of internet users in the country had a Facebook account.

But with only two million people registered on LinkedIn in Pakistan (compared to the 107 million in America), networking effectively isn’t as easy digitally as some may believe.  It is of course still a possibility, but your first steps are more likely to be connecting with people you already know to some degree.

Importantly, this shouldn’t be seen as a negative – many work referrals and business development opportunities will come from people you already know.  And once you have this growing network and the confidence in it, it’s then that you’ll find yourself beginning to engage and connect with people outside of your immediate network.

You’ll move to the next city, the next country or even the next continent.  And this is what networking is all about, right?

And it’s this – networking with people you don’t know, but who could have a huge impact on your business – that many businesses, whether based in Pakistan or not, are looking for.

Take a look online for articles around networking in Pakistan and you’ll find a whole host of different pieces.  Covering a range of different topics, one of the most interesting is this, which details an event for Pakistan’s ‘elite’.  Sitting somewhere between a party, business meeting and networking opportunity, it’s an event many entrepreneurs would love to be involved in.

Yet although this event in particular was very much invite-only, there are many others you can easily join.

In theory, you could spend all day, everyday walking around your local area, networking with people you may have seen regularly, yet have never introduced yourself to.

But whilst offline networking may seem to have benefits in abundance, it does have its downfalls, and the main problem is actually the very benefit of online networking – you’re physically able to reach out to a much wider circle.

Offline networking is often about interacting with people you’ve either been introduced to, know to some extent or share a common interest.  As such, a lot of these people are likely to operate in a very close radius to you physically.

With online networking, you can jump on LinkedIn, for instance, and once you have that base level of activity in place, send a connection request to anyone.  It doesn’t matter whether they live next door or thousands of miles away, you can research who you would like to connect with and ask them to do so.

Does that mean they’re going to accept your request?  No, it’s not guaranteed – but what guarantee is there that someone you meet in person will follow up on your request to meet up and discuss business further?

Remember, there’s nothing strange or secretive about the success you can achieve from business networking.  It’s not about special handshakes or providing money for favours.  In many instances, it’s simply about being connected with the right people; the people who have an interest in your business-type or who are involved with your industry.

Think of it in the most basic of ways.  We’re all in business to succeed, and if you can help someone else out on the way, you will, right?

But you can only do this when you know the people who need a helping hand.

As difficult as you may or may not believe networking is, whether that’s on a physical or mental level, get out there and start doing it.  From local meetups to digital networks and events, the first time may be an uncomfortable experience, but it won’t be long before you’re reaping the rewards of the efforts you’ve sown.