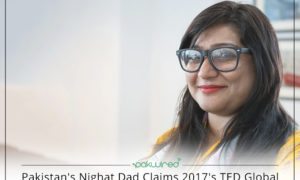 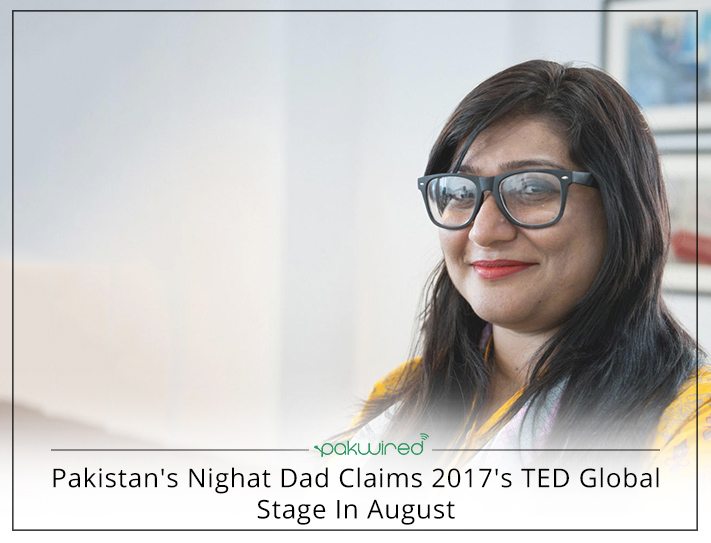 Recognized in all quarters struggling for civil rights in the digital world, Nighat Dad a lawyer and Director of Digital Rights Foundation (DRF) shall be representing Pakistan at the TEDGlobal 2017.

Dad has been selected as part of the contingent of twenty noticeable people who have contributed to the world to make a change. The change-makers from the world shall be taking on the stage of the auspicious TED Global stage as TED Global 2017 fellows, in Arusha, Tanzania, this August.

TED platform, proudly bearing the tagline: Ideas worth spreading is globally recognized as a stage occupied by change-makers who are ‘building companies, sequencing rare diseases, exploring the stars, making music, saving lives, mapping political violence, and much much more.’

TED website has announced its list of fellows for this year and Dad’s inclusion makes Pakistan proud by her status of a valiant advocate of online freedom of expression.
Earlier, Pakistan has seen Usman Riaz, Sherman Obaid Chinoy and Malala’s father, Ziaudddin Yousafzai representing the county at the TED stage.

Dad maintains a rich portfolio of struggle for civil rights, fight against cyber harassment and for freedom of expression. She has been the driving force behind establishing Pakistan’s first Cyber Harassment Helpline under the umbrella of Digital Rights Foundation.

She has worked as a lawyer, digital activist, researcher and an independent development consultant.

Dad’s Digital Rights Foundation was founded in 2012. The non-profit organization promotes digital rights literacy, particularly for women by educating the women on how to respond to online harassment.

In addition, the organization also battles against regulation giving government bodies’ extensive powers of investigation online. Dad describes the work of DRF as:

“We tell Internet users how to adjust their privacy settings, to make sure they have secure connections, change their passwords regularly and not to share unnecessary information.”

Previously, Dad has been selected by the TIME Magazine among six individuals recognized as the ‘Next Generation Leader’. She has also been honoured with the Human Rights Tulip Award by the Government of the Netherlands in 2016. She has also been awarded the Atlantic Council Digital Freedom Award 2016 for advancing and defending the cause of freedom.