Among other things 2018 is going to be remembered for, the global production of scientific papers hit an all-time high. This is, as per the data, in direct relation to the emerging economies rising the fastest. The largest increases in research output in 2018 have been exhibited by the emerging economies where Pakistan has topped the list in percentage terms, with a rise of 21%.

Those of us who follow data insights are well aware of the stature and size of the Thomson Reuters Intellectual Property and Science Business. In 2016, the company evolved into Clarivate Analytics with focus on scientific and academic research, patent analytics and regulatory standards, trademark protection, pharmaceutical and biotech intelligence, domain brand protection and IP management. With more than 100 years of scientific research insights the global, information-led company delivers products and services that support every phase of the innovation life-cycle.

According to the data, the year 2018 has witnessed an international trend of rise in the research output. Listings in the science-citation database Web of Science, maintained by Clarivate Analytics, rose by around 5% in 2018, to an estimated 1,620,731 papers which happens to be the highest ever number. 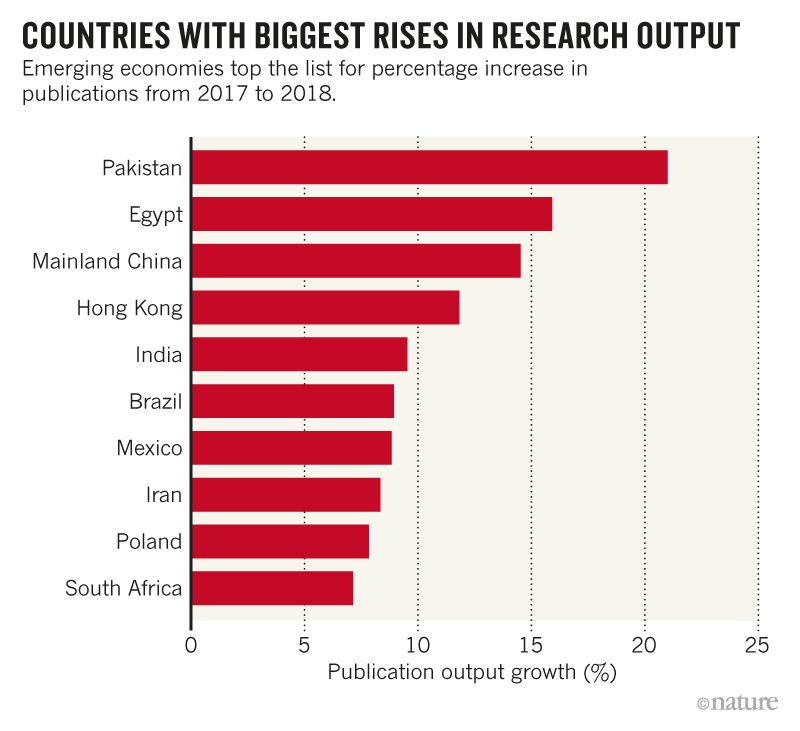 Pakistan’s research output rise of 21% was followed by Egypt’s 15.9%, and China’s 15%. Among others appearing in the list are India, Brazil, Mexico and Iran with all participants having their research output grow by more than 8% compared against the one in 2017.

A dominant view is that a substantial hike in the funding and international collaborations might have played a vital part in the the rise in publications in Pakistan.

Building on this, identifying the top talent in the sciences and social sciences, Clarivate Analytics’ Highly Cited Researchers for 2018 list has come up with SIX scientists from Pakistan. This list is significant for its recognition of world-class researchers who are selected for their exceptional research performance and impactful influence, demonstrated by production of multiple highly cited papers that rank in the top 1% by citations for field and year in Web of Science.

It is noteable that this year’s Highly Cited Researchers (HCR) list has 4000 names from all over the world, representing more than 60 nations. Out of these, 6 are from Pakistan which has a population of 200 million, and 10 researchers from India with a seven times bigger population of 1.35 billion.

Among other countries from South Asia, Iran is represented by 12 scientists while Bangladesh and Sri Lanka have no representation.