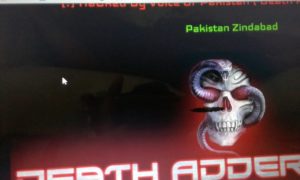 It has been reported, checked and verified that the official website of Pakistan Tehreek-e-Insaf (PTI), Insaf.pk is hacked. The hacking may well be triggered and come into effect after Ayesha Gulalai has left the party after alleging the chairman of the party Imran Khan of harassing her.

The hackers have exhibited their identity as ‘Voice of Pakistan (Death Adders Crew)’. Moreover, they have also left a message which states:

“Pakistan Tehreek e Insaaf , Wtffffff , Insaaf ? Girls Respect ? Kiss Scandals ? Dance at streets ? Even Noon League is Better then your Party , We are not any Political Party supporters , but We Will never Vote you”

Also Read: Official website of PPP and PML-N are hacked

The aforementioned message provides an indication that the hacking took place after Ayesha Gulalai left the party. The hackers also added:

“that’s All , We didn’t upload some pictures , you can Decide , Wakeup Pakistan Wakeup .

The screenshot of the hacked website i.e. Insaf.pk is as following:

At the time of writing this piece, Insaf.pk is partially recovered. The page loads and the following message appears: 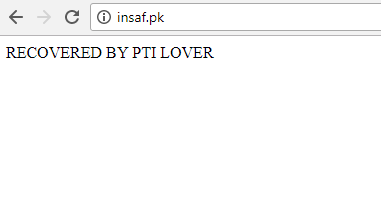 The management or even the social media team of Pakistan Tehreek-e-Insaf has not uttered a single word about the hacking. Subsequently, it cannot be stated when Insaf.pk will be officially and completely restored. Only time will tell!