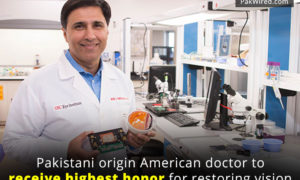 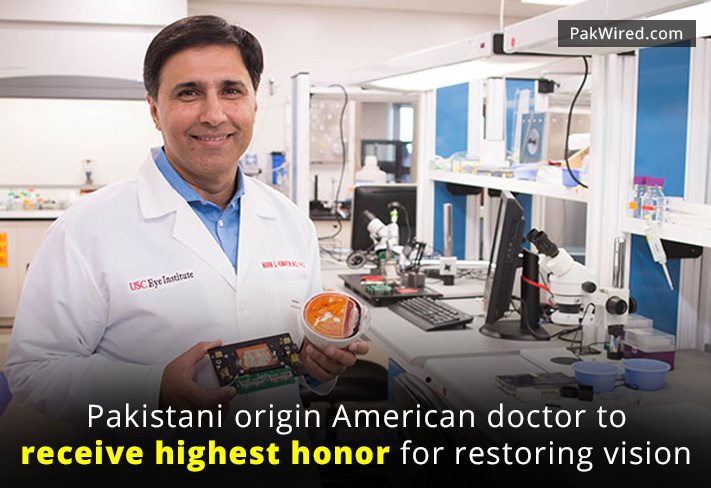 Technology is embarked on a journey which has no looking back. This has been proved by a Pakistani origin American doctor who has received the National award for Science and technology from President Barack Obama, which is the highest award in U.S.

Dr. Mark Humayun has initiated a breakthrough in the field of ophthalmology as he has developed a chip with an inbuilt camera that has the capacity to restore eyesight for a blind person. The vision is so far limited to seeing large objects and detecting movements by he has given a ray of hope to millions who have always dreamt of visualizing images.

President Obama highlighted the achievements of Dr. Mark in a televised ceremony held at the White House where he stressed on his struggles when he moved to US at an early age with his family. He got his inspiration to enter this field when his grandmother lost his eyesight due to diabetes. This encouraged the young innovator to dream of a device, which he made possible by developing Argus II, a ‘bionic eye’ to help restore vision in patients who have been blind for as long as 50 years of age.

This system called Argus II works on a pair of eyeglasses where a small video camera is attached. A processing unit transfers images from the camera into electronic signals which are transmitted through a wireless system and an artificial retina. This triggers visuals neurons.

This is the first FDA approved implanted device to restore perceived images and large movements. It was manufactured by the company Second Sight Medical Products, Inc. and is the result of a close collaboration by Keck School of Medicine of USC, the USC Eye Institute and the USC Viterbi School of Engineering.

Dr. Mark Humayun, apart from being a specialist in ophthalmology, is a professor in a university, has a medical degree from Duke University and also a doctorate degree from the University of North Carolina. He is an expert in nanotechnology and retina. Perhaps he is the only ophthalmologist who is ever elected as a member of U.S. National Academics of Medicine and Engineering which is a great honor for any professional. He is also one of the esteemed experts who has directed USC’s Engineering Research Bio metric Electronic Systems for more than a decade now.

While expressing his thoughts regarding this innovation, Dr. Mark stated:

“Well, normally in the eye, the light is focused by the cornea and retina lens and sent to the brain via the optic nerve. What happens in these conditions is that the retina is damaged so it can’t sense the light. This is where the chip comes in. What the chip does is that it establishes wireless communication between the otherwise blind eye and a camera, enabling a blind person to see”

Dr. Humayun thinks this technology is just the beginning to the new era of revolution. Extensive work is required along with sophisticated research so that enhanced vision could be provided to blind individuals in the form of restoring color vision and reading vision. Currently, this prosthetic is only limited to seeing larger objects and help them move around. Eventually, with the aid of enhanced research, blind people would be able to read small text and watch TV etc.

We are optimistic that this artificial vision innovated by Dr. Humayun would benefit millions of blind population not only in Pakistan but globally as well.