Come 2 p.m. in many Washington, D.C., restaurants, the lunch rush is all but over. The wait staff is cleaning tables across the street at the European-styled Brasserie Beck. And just around the corner at David Chang’s Momofuku CCDC, only a few diners remain at low-rise tables near the bar.

But for Kazi Mannan, owner of Sakina Halal Grill, the lunch rush is just getting started.

On a late-Friday afternoon, the door to his Pakistani-Nepalese-Indian restaurant keeps swinging open. A homeless man who is deaf walks through the door. He carries a note. Mannan reads it, then attempts to sign with the man.

Mannan asks if he wants something to eat while gesturing toward his mouth. The man holds up two fingers and pulls out $2, but Mannan shakes his head no.

That’s Mannan’s policy for every homeless person who walks through the door. At Sakina Halal Grill, the poor, homeless, and hungry eat for free — Mannan calculates he gave away 6,000 meals in 2016 — and the waiters serve them in the dining room, as if they’re full paying customers.

Mannan’s policy has been in place for three years now, ever since he took over the restaurant from previous owners. The buffet-style, halal restaurant, which is undergoing a name change from Mayur Kabab House to Sakina Halal Grill — “It’s a tribute to all the mothers around the world,” Mannan, who lost his mother Sakina, 26 years ago, says of the switch — has stood the test of time at the corner of 11th and K Street NW, for decades. It’s tucked into the side of a United Methodist church, and located just blocks from The White House.

“I’m the little guy on this block,” Mannan said. “And, I love it. Because I want to say, ‘Hey listen, corporate people and people in politics! Listen to me!’ I want to show them what love can do, and I want to spread a wave of love that touches the lives of millions.”

Mannan says he’s living the immigrant dream, in a place where people are likely to take notice. Keeping his door open — which he did Thursday during the #ADayWithoutImmigrants strike — is more than just good business, it’s an expression of his faith.

So when did you take over this restaurant?

Kazi Mannan: The restaurant has been here for decades. I took it over in 2013 and this really was my dream. I came from a village in Pakistan that didn’t have electricity or plumbing. Our school was completely outdoors. It was always my dream to overcome poverty and own a restaurant. And, that’s what I did.

How did you end up coming to the United States?

But, I came here to make money and make a better life for my family. I started working at a gas station off Benning Road in Northeast. At the time, it was a very dangerous neighborhood. I worked there for a few years, and eventually, I saved enough money to start a limousine service; someone told me that I could make my own money as a driver. The funny thing is — that’s where you meet all of the stars of D.C. I still own the company, and I’m very proud that I can provide jobs to people like me, immigrants. Because seriously for me, this is not about the money. This life, my life, is about how I help others.

KM: I am very blessed to have a truly amazing family. My mother taught me to be generous and give with my time. Because remember, we were broke. But, if we had a guest visit, she would make tea and welcome them into our home. She gave everything of herself. I’m trying to teach that to my family too. My son is in his first year of college here in Virginia, and he’s studying to go into information technology. When he’s not at school, he’s here with me working at the restaurant. And, my brother, he’s my head chef. I love having them here. But, my wife and two sons are in Pakistan, so the distance can be difficult. It’s hard to find time to see my family.

The great thing about owning a restaurant is that your customers eventually become your family. I’m in the business of hospitality, and I get to show love with good food. For me, it’s how I live out my faith.

Why did you decide to open a restaurant that serves the homeless?

KM: I’m a Muslim-American. And I like to believe that when I’m giving to the poor and hungry, God sees that. Just the act of giving a smile to someone can be a blessing. Just think about what food has the power to do.

This restaurant is an example. The day I took over, I brought in all of the homeless people that I could find, and I said, ‘You eat for free.’ They didn’t believe me. They sat down in the dining room and said, ‘Are you sure you’re not going to charge us?’ They ate and kept asking that same question. They thought that I was tricking them, but I told them, ‘This is your place to eat. As long as I own it, this is your place.’ So now they can dine-in or takeout for free. Today, I have so many homeless friends. I have phone numbers and get texts from them all of the time … That’s what I want. I want them to see me as their friend. And, I want others to see them as human beings.

Let’s talk about the food. What makes this place unique?

KM: A lot of it has to do with my kitchen staff. My brother, Sohail [Rahman], is the head chef. I also have a chef from Nepal and a chef from India. We make Pakistani and Indian staples, such as chicken karahi, goat curry, and saag paneer. The chefs work together … and not only do they make delicious food, but they represent places, which are typically at odds with each other. They come together in this kitchen and use pure love and food. When you do that, you can overcome conflict, ignorance, and hate.

How have you looked at these past few weeks, especially when it comes to President Trump’s travel ban on seven Muslim countries?

KM: As a Muslim-American and small business owner I live in fear of a Trump America. He is a real threat to our democracy. But, my heart is pure. I will continue to believe in the goodness of humanity and remain hopeful in the unity of people. I hope my message reaches all leaders of the world, not just President Trump. 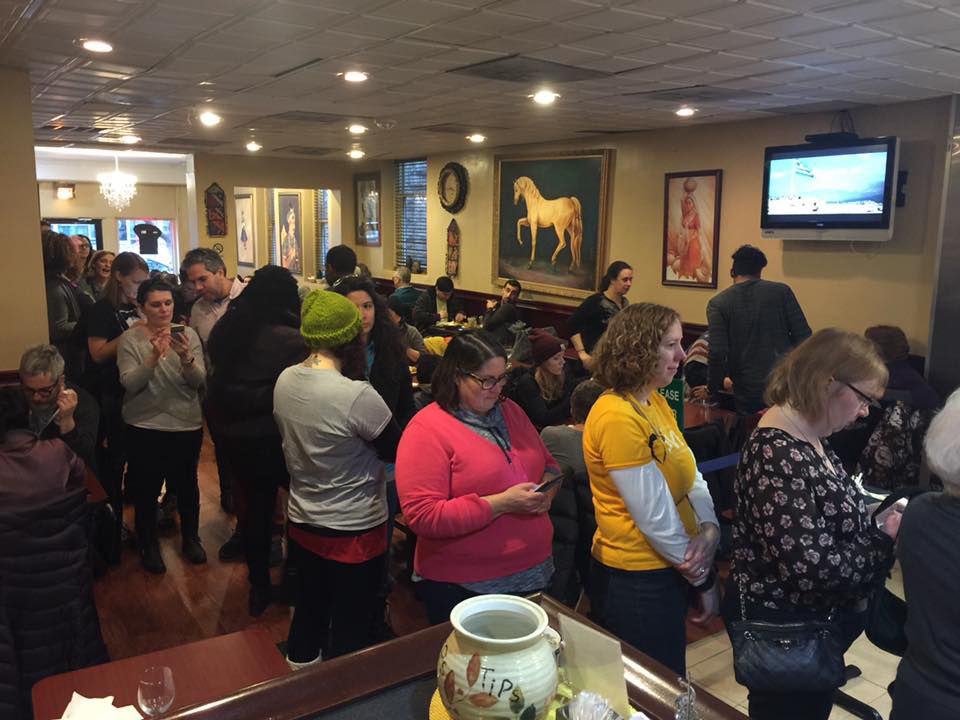 I’m standing here with this restaurant to say — I am proud to be Muslim-American. I am proud to be a citizen of this country. And as a Muslim, I want to show others the true essence of Islam — and that is to love.