ISLAMABAD — Pakistan, often in the headlines for terrorism, coups and poverty, has developed something else in recent years: a burgeoning middle class that is fueling economic growth and bolstering a fragile democracy.

The transformation is evident in Jamil Abbas, a tailor of women’s clothing whose 15 years of work has paid off with two children in private school and small luxuries like a refrigerator and a washing machine.

For companies like the Swiss food maker Nestlé SA, such hungry consumers signal a sea-change.

“Pakistan is entering the hot zone,” said Bruno Olierhoek, Nestlé’s CEO for Pakistan, saying the country appears to be at a tipping point of exploding demand. Nestlé’s sales in Pakistan have doubled in the past five years to $1 billion.

Although often overshadowed by giant neighbors India and China, Pakistan is the sixth most-populated country, with 200 million people. And now, major progress in the country’s security, economic and political environments have helped create the stability for a thriving middle class. 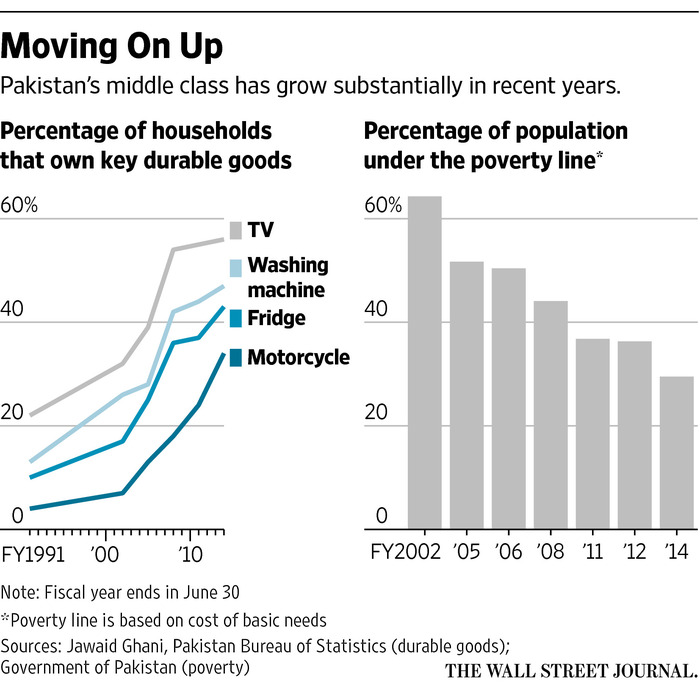 An unpublished study last year that measured living standards, from Pakistani market research firm Aftab Associates, found that 38% of the country is middle class, while a further 4% is upper class. That’s a combined 84 million people—roughly equivalent to the entire populations of Germany or Turkey.

Such households are likely to have a motorcycle, color TV, refrigerator, washing machine and at least one member who has completed school up to the age of 16, the study found. Official figures show that the proportion of households that own a motorcycle soared to 34% in 2014 from 4% in 1991, and a washing machine to 47% from 13% over that same period. These trends are also attracting international business.

“What we see is consumer spending is rising and a middle class coming up,” said Hans Laarakker, Engro’s new chief executive.

Meanwhile, during the past three years, deaths from terrorist attacks have fallen by two-thirds, as the army battles jihadists. Economic growth reached an eight-year high of nearly 5% in the past financial year, and China has begun a multibillion dollar infrastructure investment program. The Karachi stock market rose 46% last year and continues to soar.

The 2013 election marked the first democratic transition from one elected government to another. The big winners were two parties of the middle class: the Pakistan Muslim League-N of Nawaz Sharif and Imran Khan’s Pakistan Tehreek-e-Insaf. Mr. Sharif formed the government, appealing to a business constituency with his focus on private sector-led economic growth. Mr. Khan’s previously marginal party, which has the biggest proportion of college graduate voters, campaigned on improving public services and fighting graft.

Pakistan experienced a “staggering fall” in poverty from 2002 to 2014, according the World Bank, halving to 29.5% of the population. That period saw a spurt of economic growth in the early part, a takeoff in property values, a surge in the money that Pakistanis working overseas send home (now $20 billion a year), while the government also started an income subsidy for the poorest.

Still, the millions of Pakistanis living below the poverty line endure misery in a country with the world’s third-highest rate of childhood stunted growth due to chronic malnutrition.

During roughly that same period, 90% of the increase in national consumption came from the middle class, found a study by Jawaid Ghani, a professor at the Karachi School for Business and Leadership.

The living standards of the middle class in Pakistan and other developing nations is modest by Western standards, and there’s no agreed or official definition. A study by the Organization for Economic Cooperation and Development forecasts that the bulk of the growth in the middle class in the years ahead will come from Asia, which will account for two thirds of the global middle class by 2030. 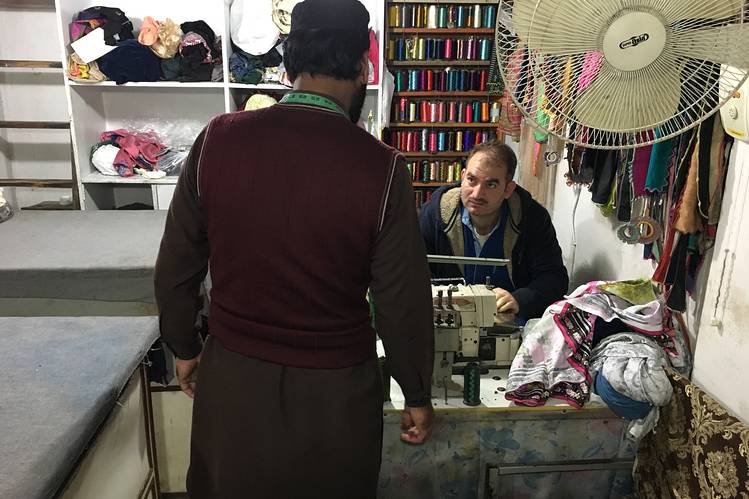 By contrast, the American middle class is shrinking: The proportion of U.S. adults living in middle-income households fell to 50% in 2015 from 61% in 1971, as the poor and the rich segments grew, according to the Pew Research Center.

In the developing world, the ability to purchase durable goods such as motorcycles—which itself can lead to new opportunities in employment, education and leisure—is generally viewed as an indicator of a middle class lifestyle. Motorcycle purchases soared in Pakistan to 2 million a year now from 95,000 in 2000, leading Honda Motor Co. to double its production capacity there. Buyers of Honda’s cheapest motorcycle typically earn between just $200 and $300 a month, which would put them well below the poverty line in the West, but here that gives them disposable income.

“All these big companies globally, if they’re not looking at Pakistan, need to look at Pakistan, because it’s a huge consumption economy emerging,” said Saquib Shirazi, chief executive of Honda’s Pakistan joint venture.

At his tailor shop, run from a basement on the outskirts of the capital Islamabad, 39-year-old Mr. Abbas makes $350 a month from a business that employs four other people. That’s enough to rent a two-room home and buy a motorcycle 18 months ago that cut his commute to work from two hours to 30 minutes.

“I’m sure there are many others like me who are trying to work hard and improve their lives,” Mr. Abbas said.

This article was originally published on: WSJ.