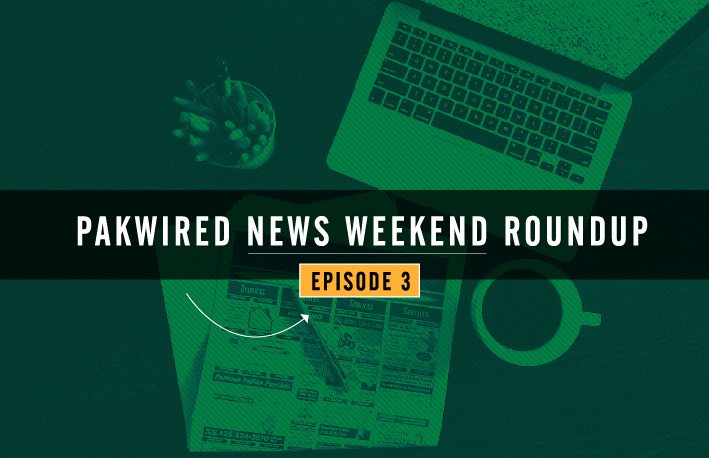 Hello everyone! The past week has seen some pretty amazing developments taking place in the tech and startup world, so sit back, relax and have a good read!

1. GE To Establish Technology And Digital Centre In Pakistan Worth $50 Million

Summary: GE (full name ‘General Electric’) is a multinational US conglomerate with companies in power, electronics, energy and many other sectors. It has revealed its plans to invest $50 million in Pakistan to set up a Technology and Digital Centre. Jeffrey Immelt, GE’s CEO, had visited Pakistan recently to discuss prospects of this venture. Reportedly, the planned centre will develop Industrial Internet solutions for its partners. GE’s workforce will see Pakistani IT professionals working on Predix, an operating environment exclusively built to develop apps for industrial clients. Let us mention here though, that this whole plan is still in progress and so far nothing is finalized. If mishandled by the babus in Islamabad’s bureaucratic circles, Pakistan’s IT community could miss out on a rare opportunity to associate themselves with a global market leader.

2. Beware! Snapchat Can Now Legally Use Your Photos However It Wants

Summary: We’re not much of Snapchat enthusiasts. The platform certainly creates a vibrant socio-cultural environment through its channels here and there but we were uncomfortable since long knowing that it insisted on us uploading our photos and videos of each and every moment. Therefore, we experienced an “Aha-We-Knew-It!” moment when we heard the app had updated its privacy policy and amended the law as follows:

“host, store, use, display, reproduce, modify, adapt, edit, publish, create derivative works from, publicly perform, broadcast, distribute, syndicate, promote, exhibit, and publicly display that content in any form and in any and all media or distribution methods (now known or later developed).”

A layman with even basic knowledge of legal jargon will realize the above is basically their right to use any of the user’s photos in whatever form they want. If you’re an addicted user, many of you must have had cramps in their stomachs by now. This is certainly worrying.

Summary: Mrs Anusha Rahman, Minister of State for Information Technology received a delegation from Cisco led by Country Head, Mr Naveed Qazi. The minister was apprised of the IT giant’s initiatives in Pakistan especially in enabling a digital revolution in Pakistan. She appreciated their efforts and brought the team’s attention on the need to create further awareness of IT across the country by holding international conferences. The minister also expressed hopes of securing Cisco’s support for establishing telecentres in remote areas of Pakistan.

4. Experts Say Pakistan Will Become A $5 Billion E-Commerce Industry by 2020

Summary: That’s right. This time, some of the leading minds have predicted a shorter timeframe for Pakistan to become a key e-commerce stakeholder. MobileComm 2015, a seminar organized by FinMan Group in Islamabad on November 5, witnessed participation by several government and private sector experts discussing the future of this growing but still considerably lagging IT sector in Pakistan. We’ll encourage you to read the details here, but let us also add that promotion of e-commerce in itself is of no use until the government creates suitable operating conditions for e-commerce companies. There are hundreds of exceptions, such as those XYZ.pk websites selling electronic, mobiles and other merchandise, some even earning millions of dollars each year. The government will, however, have to provide special benefits to foreign investors so a stable and evolving culture of e-commerce sets foot.

Summary: Following up from the news above, several Pakistani IT experts are of the view that the federal government should create conducive conditions so that Internet access is enabled for the more than 150 million citizens still deprived of it. This is quite an astounding figure and it comes as no surprise when Pakistan has little-to-no-mention in the global IT world. Telenor has done well by introducing Internet.org in Pakistan but the ordinary citizen in rural areas should not be forced to buy phones which can access it. The state of so-called “IT labs” in government-run schools across Pakistan presents a dismal picture. In the long run, as more and more Pakistanis get access to the Internet, the more their voices will be heard. On the other hand, for the time being the government should seriously whip up PTCL to improve its broadband capacities as service facilities are getting worse day by day.

Summary: Who hasn’t heard of Edward Snowden, perhaps the most wanted American whistleblower in history? He has been gradually publishing classified intelligence documents, property of the notorious US National Security Agency (NSA) for more than two years now. As a self-proclaimed champion of the right to privacy, Snowden has been warning the world about inherent dangers of espionage or surveillance of their communication devices, particularly private messaging systems. In a recent message, the whistleblower was seen endorsing and promoting an end-to-end encrypted communications app called “Signal”. It seems somewhat similar to “Wiper” but reportedly is the most secure messenger app there is, as of yet. Its developed is Open Whisper Systems, a privacy-focused non-profit software company famous in the underground community. Android users can now download this free app from the Google Play Store. Good news for you is that the app has no ads, yay! However, we’re pretty skeptical when it comes to “recommendations”, especially by serving or retired US government officials. We aren’t too enthusiastic about using this app ourselves.

Summary: Jaroka is Pakistan’s first rural tele-healthcare project, brainchild of Mr Atif Mumtaz, a Digital Vision Fellow at Stanford University. The project aims to utilize ICT resources to deliver high-quality medical and health facilities to low-income families Pakistan’s rural areas by patching up Rural Health Workers with the Jaroka team. Not only locals, the service will also enable rural communities to receive assistance from international healthcare professionals too. It’s a one-of-a-kind initiative and one which should be examined by state authorities. The project is directly implemented by Mardan-based UM Healthcare Trust. Participants providing assistance include NUST-SEECS, the Association of Pakistani-descent Physicians in North America, National Rural Development Program and Digital Vision Program at Stanford University. We wish the Jaroka team all the best!

Summary: Last week we gave you a glimpse into the nasty, dark side of Uber’s world; where drivers are arrested for rape, theft, abuse or plain murder. We’ve been hearing a lot about this sleek alternative known as Careem, which calls itself the #1 car-booking app in Middle East & North Africa (MENA). The company entered the Pakistani market early this year and is already making waves for its reliability and very nifty user interface. We came across a video recently in which Mr Monis Rahman, Founder and CEO of Pakistan’s #1 job portal ROZEE.PK, gave as his personal experience with Careem. He posted a message saying “Always happy to support my friends at Careem. Do try out the service”. We know Mr Rahman, he doesn’t just endorse any brand. This has certainly got us interested!

Summary: We can’t think of anyone not growing up and playing those unbelievably addictive video games developed by Nintendo. The Japanese company seems to have understood the potential of releasing games in the app markets, and that’s exactly what it did. Its first release Miitomo is a gaming-cum-social networking experience in the traditional Nintendo style with cartoonish characters. The developers designed it so that users can create their online avatars and interact with individuals elsewhere and get to know each other better. Sounds weird but anyways, we’ll wait and see how it fares.

10. US And UK Banks To Hold Joint Cyber Security Exercise

Summary: Some of the leading banks and financial enterprises from the US and UK will be holding a joint cyber exercise ‘Operation Resilient Shield’ to test the effectiveness of their preparations to protect critical information systems from hackers and other network threats. Similar exercises have taken place in the past as well, which were coordinated by the Bank in the UK. It’s well known today that the banking industry is an attractive target for cyber criminals who can steal millions simply through the click of a button. The exercise was being planned since months. To be noted that Recently, UK-based TalkTalk was infiltrated by hackers who stole bank account details and sort codes of around 15,600 customers.