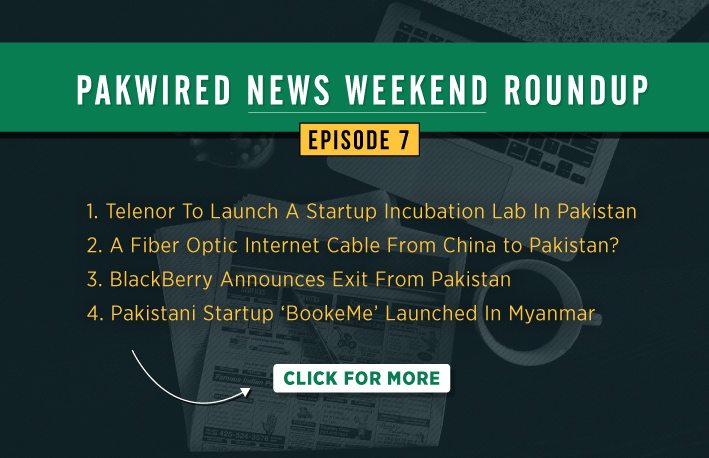 Hello everyone! Excepting a rather bad news from BlackBerry, the past week has seen some fantastic developments. Pakistan’s startup sector is soaring higher and higher as expected, and we can expect more such great news in the new year that awaits us. Happy Reading! :)

1. Telenor To Launch A Startup Incubation Lab In Pakistan

Summary: It’s heartening to see that Norway-based telecom giant Telenor has confidence in Pakistan’s ICT sector. News doing the rounds is that Telenor Pakistan will formally launch a startup incubator very soon. Like other popular incubators such as Plan 9/Plan X, Telenor will provide technical resources and mentorship to budding entrepreneurs to wish to make it big in the days to come. It goes without mentioning that the biggest advantage startups will have is the network support of Telenor’s affiliates and distribution channels. For starters, the telecom giant has already reached agreements with Organization of Pakistani Entrepreneurs (OPEN), The Indus Entrepreneurs (TiE) and Founders Institute. Irfan Wahab Khan, Deputy CEO at Telenor Pakistan, confirmed the news. For further details, please click here.

2. A Fiber Optic Internet Cable From China to Pakistan?

Summary: Unconfirmed reports claim that the Government of Pakistan is in back-channel talks with Beijing to connect Rawalpindi with a $44 million fibre optic cable coming from China. Although Pakistan Telecommunication Authority (PTA) says it is aware of this development, it has yet to be formally taken onboard. Reportedly, this high-speed fibre optic Internet cable will provide Pakistani Internet users with a direct telecom access to China and Central Asian Republics. The cable is expected to be laid between Rawalpindi and Khunjerab (approximately 800 kilometres). Azmat Ali Ranha, Secretary in the IT Ministry, said that Special Communications Organization (which has mostly serving and retired Pakistani military officers in top positions) will oversee the project.

Summary: Canadian company BlackBerry (part of erstwhile Research In Motion) recently announced it was exiting the Pakistani market altogether (wrapping up operations). Marty Beard, Chief Operating Officer at BlackBerry claims the decision was taken after alleged pressure by the Government of Pakistan to provide access to sensitive user data in the BlackBerry Enterprise Servers (BES). It is yet unclear whether this is precisely the reason why BlackBerry made such a symbolic announcement as the company has been known to have provided complete access to intelligence agencies in India, which had pressured for interception capabilities since 2008. We believe BlackBerry’s move reeks of fancy-worded hypocrisy in an attempt to smear Pakistan.

Summary: This is pretty exciting news. BookMe, an online bus and cinema ticket booking facility, has officially stepped foot outside in Myanmar. Faizan Aslam, founder of the startup, expressed excitement on venturing into the South East Asian country’s market. This international outreach was possible because of BookMe’s partnership with Lychee Ventures. The latter owns several food and entertainment publications in Myanmar. It’s worth noting that BookMe grew out of Plan 9 and Plan X. This will certainly enhance young talents’ confidence on the environment provided by Punjab Information Technology Board (PITB).

Summary: It’s not so often that Pakistanis find the emergence of a new startup incubator, as many consider it not worth the risk. And we can’t blame them. The uncertain economic situation in Pakistan coupled with next-to-zero support by government circles makes the possibility even more remote. However, two prominent Mobilink veterans Zouhair Khaliq (ex-CEO) and Parvez Abbasi (ex-CCO) have come forward to share their confidence with young talent at large. This new incubator, called ‘TeamUp’, works individually with each startup. It helps them refines their market approach connecting them with the right investors in the right time. They’ve put up an interesting infographic detailing their network plan for startups and investors here. For those of you waiting to pitch their ideas in order to secure investments, register on their website and submit your ideas for review!

6. Mark Zuckerberg Explains Why He Didn’t Give His Fortune To Charity

Summary: Just a few hours after Facebook founder and CEO Mark Zuckerberg announced the birth of his daughter and a pledge to give 99% of his shares to his philanthropic foundation, critics raised questions as to why the ‘Chan Zuckerberg Initiative’ was a Limited Liability Company (LLC) and not a non-profit charity organization, as is conventionally the case. Zuckerberg had to post another update to clarify the issue before it was further misunderstood. We suggest our readers read John Cassidy’s op-ed for the New Yorker, “Mark Zuckerberg and the Rise of Philanthrocapitalism” for a more neutral analysis of the issue.

Summary: Google released the ‘Cardboard Camera‘ app on the Play Store this Thursday which will enable smartphone users to capture 360 degree panoramic photos and view them through the virtual reality Google Cardboard device. The coolest aspect to this is that you can capture the sound to give a complete interactive experience! An iOS version of the app is also in the pipeline but Google declined to specify an exact timeframe.

Summary: Yahoo’s new Messenger app resembles WhatsApp and Facebook Messenger. Users login with their phone number or through their Yahoo email (as in Wiper). What sets Yahoo’s new product apartis its built-in GIF search (via Tumblr, how we love these!) and the facility to share innumerable photos instantly (either through Wi-Fi or data connections). You can also ‘unsend’ a message you sent before, once again resembling something you see on Wiper. It runs on iOS, Android and there’s also a web app. Expect a desktop version soon!

9. Make Any Watch A Smartwatch!

Summary: As crazy as it may sound, this is actually an actual product. US-based technology company Chronos has developed a disc which integrates modern notification and tracking technology with regular watches which we all wear. You can check out some of the FAQs on their website to know more and pre-order one for yourself. The product is expected to be available for purchase next year at a reasonable price of $99 (roughly Rs. 10,500). The Chronos disc does not have a screen or voice control but makes for an interesting substitute for those who can’t afford to purchase fancy smartwatches.

Summary: Before concluding our weekly roundup, we leave you with a personal account from Shawn Carolan, Founder and CEO of Handle. His advice to entrepreneurs is simple yet thought-provoking. Shawn shares personal experiences and conversations with some leading Silcon Valley leaders on how to be productive in the workplace. Click here to read it, it will hardly take 6 minutes.