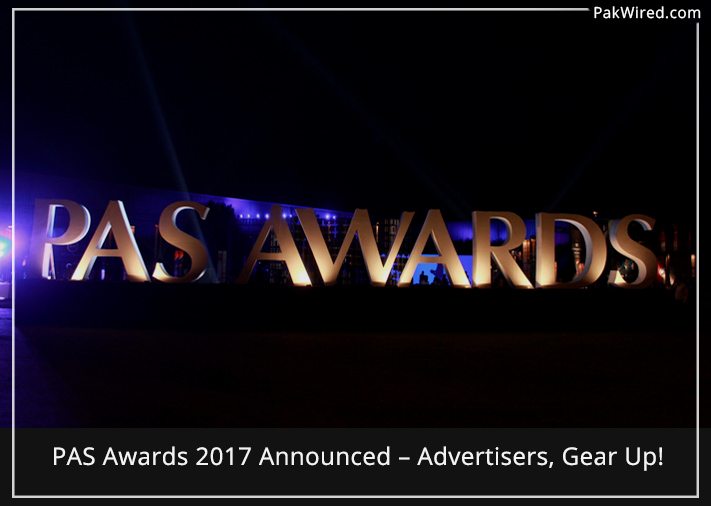 The most coveted advertising award ceremony in Pakistan has a date for this year’s event! That’s right. The PAS Awards 2017 have now been officially announced. Founded in 2011, the awards are an initiative by the Pakistan Advertisers Society (PAS) in order to celebrate and promote ‘ideas that work’. All year round, brands and agencies try their hardest to create unique and impactful campaigns so that they may send in their entries for a chance to win this much-celebrated award.

Winning a PAS award has become both a certificate as well as a symbol of achievement for the Pakistani advertising industry.

This year, the PAS Awards have been divided into 20 regular as well as 12 special categories. Apart from these, there are 3 additional special awards, i.e. ‘Top Brand, 2016’, ‘Campaign of The Year’ and ‘Best Nationally Originated Campaign’. It is in these categories where advertisers from all across Pakistan will be presenting their best ideas and work to bring the glory to their respective offices.

Apart from the aforementioned, two new campaigns announced this year have been ‘Campaign for Good’ as well as ‘Corporate Campaign’ which are set to honor good CSR and corporate campaigns respectively.

The 7th PAS Awards is expected to rake in more than 300 entries divided across various categories. The entries will go through a tight and tough evaluation process by a set of jurors that consists of the brightest advertising minds in Pakistan. The jurors will evaluate the entries based on different sets of criteria in order to select the best of the best from all over the country to reward them. This year’s jury is being led by Ehsan A. Malik, who is not only the CEO of the Pakistan Business Council & of Unilever Pakistan Limited, but is also a big and respected name in the advertising industry in his own right.

The last date to send in your entries for the PAS Awards is 15th February, 2017. The awards are expected to be announced on the 15th April the same year.