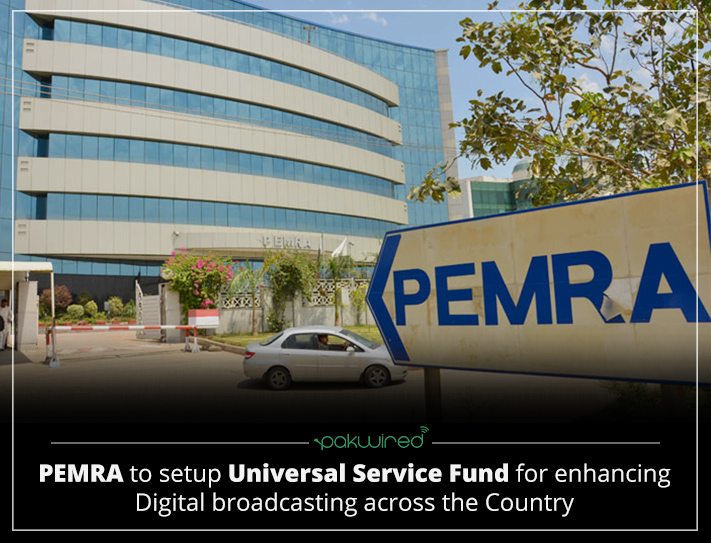 As part of a digitalization plan to provide access to digital services in underserved areas of the country, Pakistan Electronic Media Regulatory Authority (PEMRA) has announced the establishment its own Universal Service Fund (USF).

On Thursday, the electronic regulatory authority shared with the National Standing Committee on Information and Broadcasting, its demand of an amount of Rs75 million as seed capital for the proposed project of USF. The amount, the authority explained, shall be utilized for the execution of digitalization plan in the upcoming federal budget for year 2017-18.

It is however pertinent to mention that, Ministry of Information Technology and Telecommunication has already set up a Universal Service Fund where telecom companies contribute 1.5 percent of their gross annual earnings to establish telecom infrastructure in remote and un-served areas of the country.

3008.02 million for Information and Broadcasting Ministry

The budgetary proposals of total Rs3008.02 million were set to be approved by National Standing Committee on Information this Thursday – despite objections from some members.

These proposals had been given the go ahead under Public Sector Development Program (PSDP) for much-needed regulatory reforms in Information and Broadcasting Ministry and its affiliated bodies for year 2017-18. These proposals would then be sent to Ministry of Planning and Reforms and Finance Division for evaluation and inclusion in the federal budget for year 2017-18.

The Standing Committee has been told that Information and Broadcasting Division had asked for an allocation of Rs447.9 million for 12 ongoing projects – besides Rs2560.12 million for 28 upcoming projects. The Committee has been informed that the ongoing 12 projects are under way at Pakistan Television and Pakistan Broadcasting Corporation, and would culminate by the end of the current financial year, subject to the grant of funds.

The federal government had allocated Rs 335.405 million for establishment of state-of-the-art infrastructure, replacement of outdated equipment and capacity enhancement in different departments including PBC, PNCA, PID, APPC, DEMP, ISA and PEMRA among others. But so far, just Rs174 million had been released of which an amount of Rs114.77 million has been used.

Some senior committee members, however, expressed their reservations regarding the pace of progress, saying that expenditure of these projects increased by 10 times due to delay in completion.

Absar Alam, chairman PEMRA, opined that the move from analogue to digitalization would greatly improve broadcasting services in the country. He also shared that under the proposed structure, software would be developed for monitoring upto 250 channels. Currently 107 TV channels are operational in the country, however only 50 are being monitored.