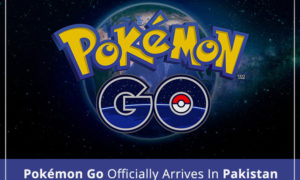 What a news for the eager at home!
Pokémon Go, launched worldwide in July 2016 and creating a racket ever since in the young and old alike, is now available in Pakistan as well. After a wait of nearly six months, Pakistanis can now download and play Pokémon GO officially from the App Store and Google Play.

Niantic – the American software development company based in San Francisco & best known for developing and publishing the augmented reality mobile game Pokémon Go, announced that starting today, anyone in Pakistan and other South Asian countries including India, Nepal, Bhutan, Sri Lanka and Bangladesh can download and play Pokémon GO officially. The announcement comes as a welcome relief to the people employing, or anticipating to use, unofficial routes because now the big digital entertainment is here through proper means. And this means you can simply enjoy the treat without having to worry for any consequences.

Pokémon Go is a free-to-play, location-based augmented reality game developed by Niantic for iOS and Android devices. Soon after its release, Pokémon Go became a global phenomenon and has been one of the most used and profitable mobile apps in 2016. The app had been downloaded more than 500 million times worldwide in last five months.

Some of the most famous records set by The Pokémon Go

People all over the world have been using the game’s GPS technology to find and catch their favorite Pokémon in real-time locations, before training them up to fight with other players.

Most revenue grossed by a mobile game in its first month

Niantic’s flagship GPS-based game Pokémon Go made huge revenue of $206.5 million in the first month of its release. This is despite the fact that the game was initially launched only in the United States, Australia and New Zealand only in July this year. Some of the European countries availed the app soon after.

Most downloaded mobile game in its first month

Pokémon Go has been downloaded 130 million in the very first month of its release. According to a rough estimate, there are around 30 million more Pokémon Go players than the total number of people in Philippines.

Fastest time to make $100 million by a mobile game

Pokémon Go made $100 million in first 20 days of its launch. This makes Pokémon Go the highest grossing mobile game in the world.

Niantic’s flagship game has also been the highest-grossing mobile game in several different countries at the same time.