Are you concerned about the number of people you are reaching on social media? Unless you are a major influencer, the answer to that is probably ‘yes’ (Well, on the second thought, any influencer would like to reach more as well :)). Even if you have tens of thousands of followers, regular growth on your social platforms are necessary to remain relevant in the medium. You want more than just numbers, you want engagement.

Unfortunately, social media isn’t like other realms. It is constantly changing and adapting, matching the tone, use and needs of the majority. Everyone has their own means of using social media, and you can’t appeal to them all. You can only hope to target your own individual audience, and keep them coming back, and sharing, so you expand your network organically.

The very fact that services providing follows for pay are so alarmingly popular shows a lack of understanding of the natural ebb and flow of these sites. They mistake a heavy follower number as the be all and end all. It puts a damper on their results, because it is focusing on the wrong element that makes social media so successful as a marketing tool.

But I have some good news for you: increasing your reach isn’t actually that hard. These five practical tips are ridiculously easy, and you can implement them immediately.

Most of us pepper in images every once in awhile, but most will be things we find online. Most will be, as a matter of fact. But you are just sharing something that has already made the rounds, and probably been popular.

Sure, this is a quick way of injecting a bit of activity, but it is fleeting. Coming up with original images is longer term and more beneficial.

Whether they are Photoshopped images that you can do yourself, or something made on a generator (like SomeEcards), you would be amazed at how popular something original can become.

Here are more tools you can use:

That’s nothing to go crazy about. Some times may work for you sometimes. On other days they will not work as expected. However knowing your most “engaging” time may work!

I used Tweriod and learned something I never would have suspected: my best posting time on Mondays – a day I never saw engagement – was between midnight and 1 AM EST. Guess what? I started scheduling tweets for that time, and I saw an immediate 40% increase in my follower activity. All at a time I never would have thought to tweet at.

Unfortunately, only Twitter has a stable tool to find out this data. But you can find out the best posting time for other platforms through some old fashioned stat gathering. Just look at the last several months worth of likes, shares, and comments. Then find the most common median time for those posts.

Nothing works quite like this. Knowing when your followers are on is crucial to catching their attention. If you are an online business or blog, that means catching people in time zones all over the world.

Another tool that seems to work is Manage Flitter and its “PowerPost” feature. It allows you to schedule one post for each day for your best time. It’s free and I am using it as my “editorial calendar” tool for Twitter: 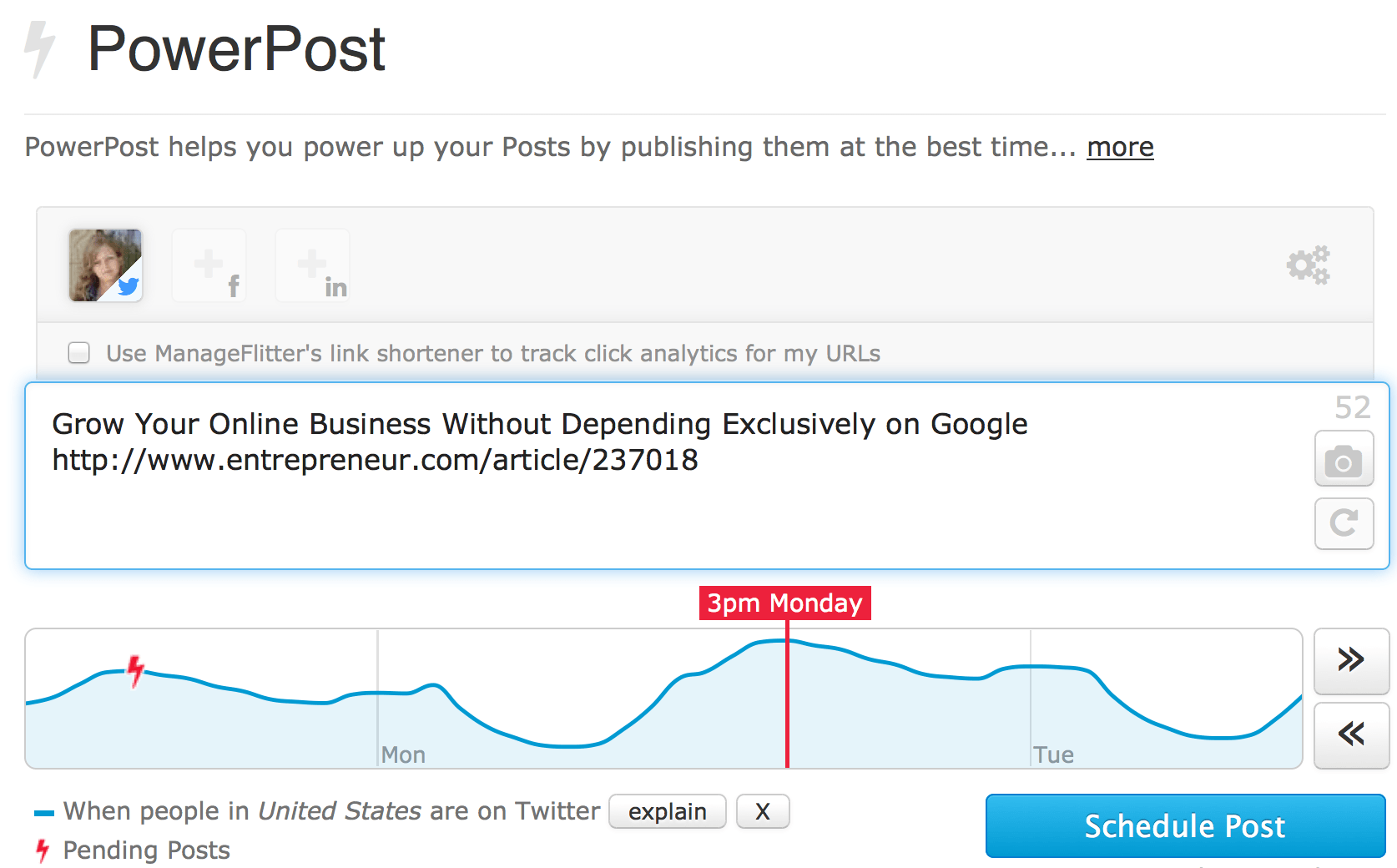 A lot of people are on Twitter, which is good. Because that is the easiest way to get influencer’s attention. The open nature of the platform allows you to @tag them more effectively than either Facebook or Google+. So you can share their content, and they will know it.

This is a great ice breaker. I can’t tell you how many partnership and guest posting opportunities I have found this way, just through showing appreciation for what they have created. The best part is that most influencers are looking for connections anyway. So they are going to be eager to jump at a chance to say thank you, and strike up a conversation.

A good rule of thumb to follow for this is to post third party content about three to four times per week, with an @tag and a comment about why you liked it/what it is about. Any more than that and you start to look like a networking hunter, just publishing links without any concern to the actual content. Most users see right through that, and it has the opposite effect.

Be sure you are also reading through the content you post. No skimming just to get a general idea, or other cheating tactics. Remember: this is an attempt to make solid connections with real people. Treat it that way. 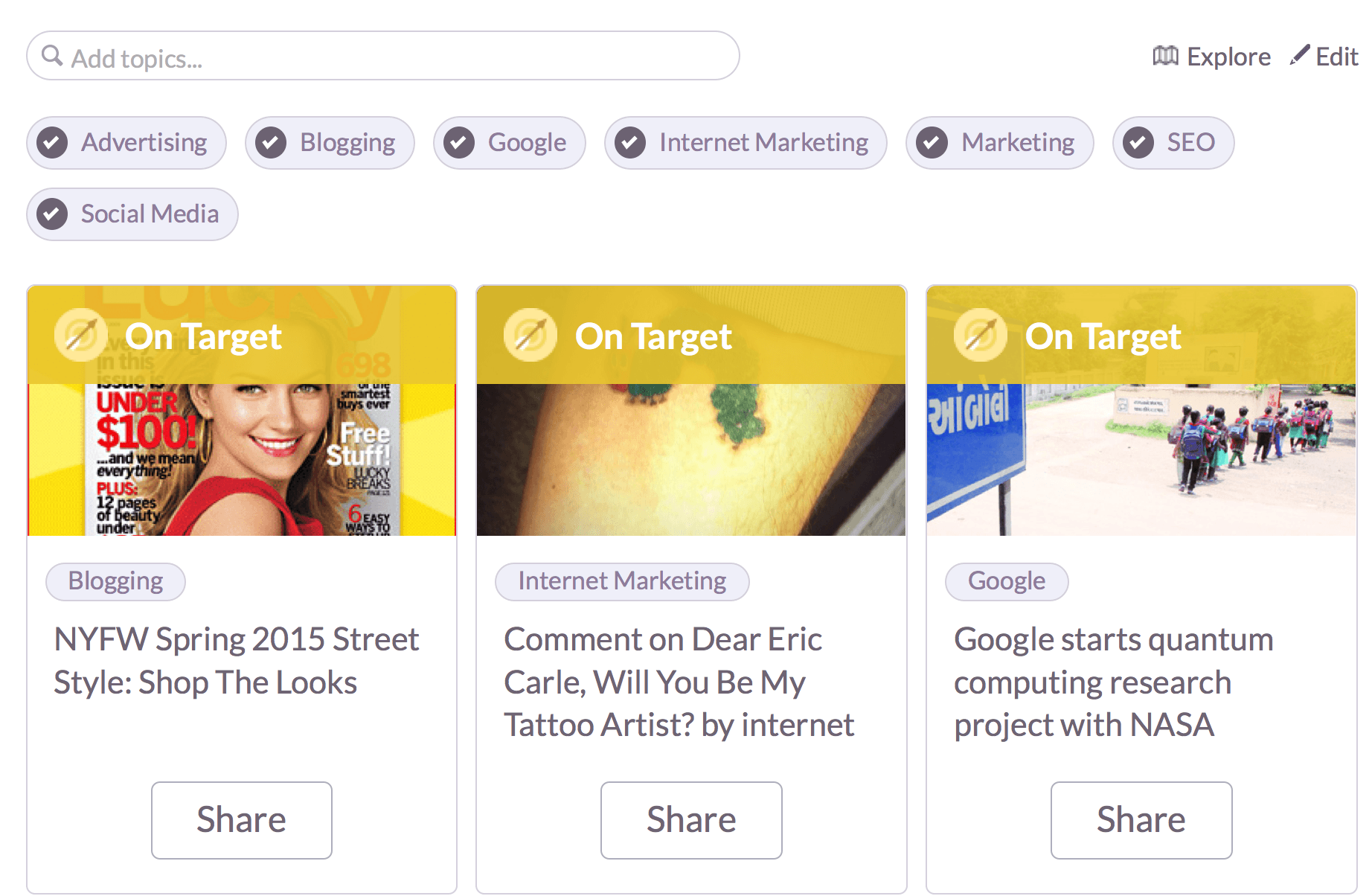 Think that single share was enough? Think again. Sharing something multiple times will ensure that it gets the attention by different crowds. For Facebook, content should be shared at least twice that day, then a few times through the coming weeks. The same goes for a busy Google+ or LinkedIn page. For Twitter, it should be multiple times within the first few hours. Some people will even do once an hour.

Why so many times for Twitter? The live update means your status could be wiped out from a feed within seconds. You have to go the extra mile to ensure you are being seen by as many people as possible.

If you have a Facebook or other page that just isn’t that busy, should you re-share less? No…you should be sharing other content more! The more you use an account, the more chances for engagement. You may end up boosting your activity through sheer force of will.

Here are some actual tips on different ways to re-share your content without saying the same things all the time.

To get organized: Schedule re-packaged updates not to forget to publish them. Use Tweetdeck, Twuffer, Hootsuite and Buffer to schedule and buffer updates. 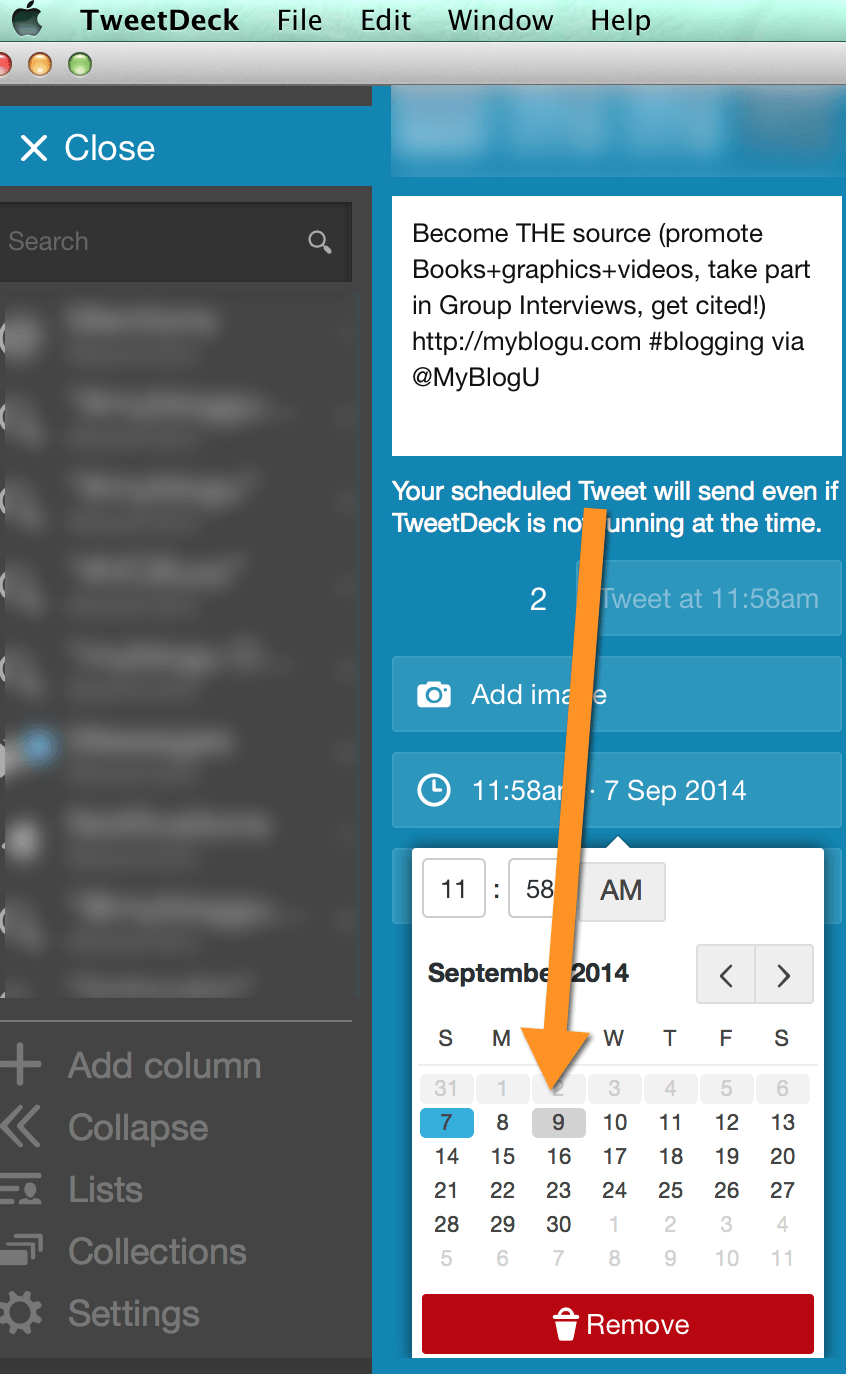 Recently, I saw someone tweet with a comment about CeeLo Green and his recent ‘no contest’ plea to slipping drugs in a woman’s drink. For those who don’t know, the singer followed this up with a series of really ugly tweets himself about how it “isn’t rape if she is unconscious”, among other things.

The tweet I saw commented on how he was proof of a serious problem in how society views rape and rape culture. It was followed by a link that went to a blog post that was several years old about the general topic, and the author’s thoughts on it.   This was a brilliant move.

While they could have written a brand new bit of content, they used a controversy that was related to bring attention to an old one. It got thousands of new views, alerted people to their website, and got a lot of traction on social media. From a post that had already died out a long time ago.  You don’t want to push this one too far, but using controversy can be a great tool.

The best way to spot controversy is to track trends. Monitoring trendy hashtags should be your daily commitment: 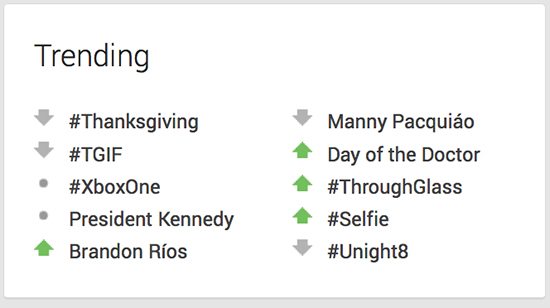 Improvement isn’t going to happen overnight, at least not a truly measurable amount of improvement. It takes time, dedication and patience. Not to mention a fair amount of tweaking as you find what works for you in the moment.

Eventually, you will have to change your tactics a bit. That is just the nature of the beast; social media is always adapting and shifting, and you have to keep up with it. But as long as your remain consistent, you will see results. Even if they happen slowly, and are not the immediate jump into success that you secretly dream of.

Have some tips to share? Did something work for you? We would love to hear about it, so leave us a comment!