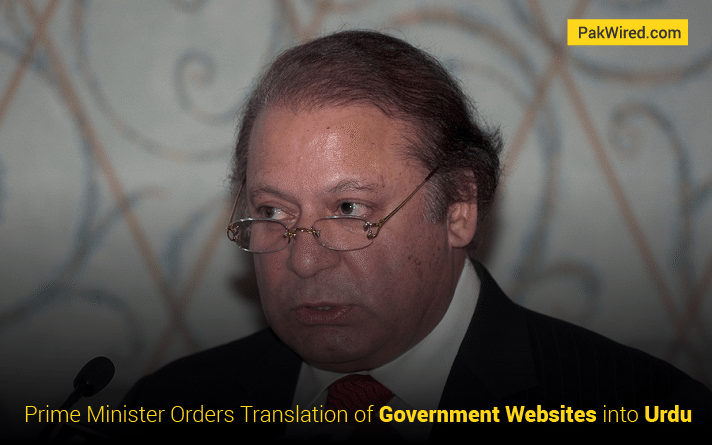 Urdu is the official language of Pakistan and this would reflect in all state communication including the government websites. Pakistan Prime Minister, Nawaz Sharif has ordered that going forward Urdu would be the language used for all government communications. This not only includes the national speeches made by government officials but also the international ones made by them. The Prime Minister has also ordered that Urdu text replace English in all websites related to the government. These include the websites for passports, driving licenses other government documents and utility bills. Translation of all government websites into Urdu is a firm step in an effort to reiterate Urdu as the official language of Pakistan.

This is by no means an unprecedented move; in fact Article 251 of the constitution which Pakistan approved in 1973 states clearly that Urdu should gradually take over as the official language in Pakistan. The article orders this change to take place within the next 15 years and allows for the use of English till the time the transition is successfully completed.

The government took this decision after its cabinet meeting held on May 14th 2015. While this decision has been long overdue, the government now seems to be in earnest about implementing it as soon as possible. The federal government has already asked for suggestions that would help in making the transition from English to Urdu smooth and painless.

Several Pakistani celebrities have faced severe criticism in the past for using broken English on an international arena. One of the reasons for the change in the official language of Pakistan is to ensure such embarrassments are avoided in the future. The government wants to promote a feeling of pride in their own language and help people be comfortable in their own tongue without having to imitate their western counterparts.

It is interesting to know that after the approval of the constitution in 1973 certain provinces like Balochistan and Khyber-Pakhtunkhwa retained Urdu as their official language. They insisted that all their government officials and even members of provincial assemblies take their oath in Urdu. Urdu is by no means the only language spoken in these places. Other languages like Hindko, Pashto and Seraiki are just as popular.

There were some provincial assemblies which faced a dilemma in their choice of official language. Punjab and Sindh is one such assembly that was not clear in their choice of their official language. They could not come to a consensus between their provincial interests and the interests of their nation as a whole post the laying of the constitution.

The government has faced criticism in the past for not implementing the decision clearly laid down in the constitution. The state of affairs is going to change soon with Pakistan giving its national language the respect that it deserves.

While the government is clear in promoting Urdu as the national and official language they are by no means trying to obliterate the other rich languages in the country. Provinces are free to teach and promote the language of their choice as long as Urdu remains the prominent language in all their national and international communications.