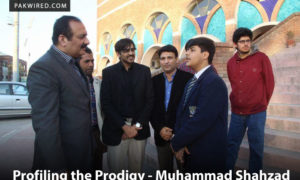 Muhammad Shahzad has proven that you do not need a college degree or years of experience to do something great. Yes, he’s only 14 years old and he’s already made the news.

He is one of the most brilliant ethical hackers in Pakistan. He detects vulnerabilities in software and make them so secure that other hackers cannot hack them. He has so far detected vulnerabilities in programs for Google, Yahoo and Apple and is working to publish a book on Web Application Penetration testing.

Currently an eight-grade student at Beaconhouse School System, he started off at the age of 10 when he got exposed to the field of hacking. His father’s email account got hacked and he tried to regain control of it. He learned ethical hacking along the way. He has also become a security researcher without taking any formal courses.

Initially, Shahzad had to go through the stigma surrounding the word ‘hacking’ as most people took up its negative connotation and considered ‘ethical hacking’ to be an oxymoron. Due to his age, he was also not taken seriously by his elders. But he persisted and started his own brand called DezignBurg. He is also part of the WhizKids program at Plan9.

Shahzad also freelances and provides services for vulnerability assessment, penetration testing and server hardening. He has also been summoned as a Guest Speaker at UET and NUST. He also served as a security consultant for Bramerz for a short period of time. Wait, there’s more. He got invited to the top TV Shows in Pakistan – Hasb-e-Haal at Dunya TV, Mezaak Raat at Dunya TV, and Subha-e-Pakistan at Geo TV.

He plans to pursue MIT’s Master’s degree in Information Security. He’s also on his way in making it big in the Silicon Valley, and a Masters degree from MIT would only make it easier.