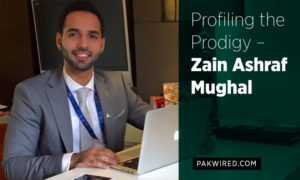 Yes, he’s the guy who owns Hardee’s and got much of the beating for the controversial ad last year. Zain Ashraf started off with a Bachelors in Entrepreneurship from the University of Miami. He is the current Director of Super Asia Group, one of the major groups in Pakistan dealiing in Home Appliances, Automobiles and Insulation Materials.

And when Hardee’s stepped into Pakistan in 2009, Zain again stepped into the limelight and his approach of ‘more to come’ was the key driver behind Hardee’s success in Pakistan.

He then also formed an Interactive Digital Agency ‘Ivoke’ and diversified the traditional business  of his father. Ivoke serves many small businesses and even Fortune 500 companies. Zain Ashraf has also founded Eccountant which is Pakistan’s first online web accounting app for startups who want to make daily financial management tasks easier. This app was chosen to be amongst top 100 startups at the Web Summit in Dublin in 2014 and was picked by Google For Entrepreneurs at Startup BBQ too.

But he doesn’t do business only, he also gives back to the community. He is also the founder of Seedout, Pakistan’s 1st Interest-Free Crowdfunding Platform, which connects borrowers with donors and allows borrowers to set their businesses up and pay back the loans when their business is set. In other words, it helps raise entrepreneurs, something that it proudly professes.

Seedout held a Polo Cup in 2015 between Pakistan and the USA, and invited 1,500+ influential people from Pakistan for fundraising. It then launched a campaign in Ramadan 2015 with the hashtag #ISupportSeedout and got the support of celebrities across Pakistan.

It also later took the initiative to launch ‘Zeenat Gari’ in collaboration with the Coca Cola Company. Under this program underprivileged women will be given rickshaws to drive, as a way of earning a better livelihood. Not only was this a step towards women empowerment, but an illustration of Zain Ashraf’s commitment towards creating social impact.

If this was not enough, he also launched Pakistan’s 1st Social Entrepreneurship Program taking over 100 students on board from all across Pakistan.

Well, Zain Ashraf is still under 30 and perhaps one of the most eligible bachelors out there. Well this was the magazine ‘Good Times’ says!