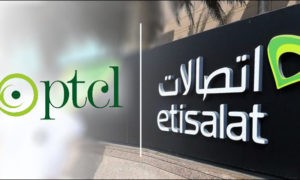 The Pakistan Telecommunication Company Limited (PTCL) had 26% of its shares acquired by Etisalat back in 2006. However, part of the payment was held back due to a dispute over non-transferred assets, resulting in Etisalat refusing to cough up payments to the tune of $800 million. The UAE-based company has just agreed to release this amount to PTCL.

As per the Sale Purchase Agreement, Pakistan is owed $800 million outstanding dues for the privatization, payable by Etisalat but withheld due to a dispute over the transfer of 34 property titles.

The news of the decade-old payment finally being transferred came from Secretary Privatization Commission, Rizwan Malik. Malik spoke of the development during a briefing of the Senate Standing Committee on Privatization, headed by Mir Muhammad Yousaf Badini.

Etisalat had finalized and closed the deal totaling around $2.6 billion, or $2.598 billion to be exact, for 26% of the shares and management control of PTCL. However, PTCL is state-owned and Etisalat had to pay the country only $1.8 billion at the time, with the rest to be transferred in nine installments. However, complications soon arose.

The ownership titles of 34 properties were not transferred to Etisalat, and a tussle started, compromising the remaining payment as well. The government did not transfer those properties to PTCL, citing legal concerns, while Etisalat urged a handover, more than a decade ago. To date, 3214 properties titles have now been transferred.

The Privatization Commission met the Etisalat officials recently, where they were apprised of the situation and informed of the latest updates. The company has presently taken on board Khan Associates, a legal firm, for valuation of the 34 properties. According to Rizwan Malik, there will also be a physical verification of the properties whose ownership titles have already been transferred.

According to reports, the value of the disputed properties is estimated at $92.4 million by the hired evaluators. The pending payment of $800 million has apparently been lying in wait in the escrow account for more than a decade. The transfer is all set to happen when the dispute is satisfactorily settled.

Besides the 26% sold to Etisalat, 12% shares were sold to the general public as well. As a result, the government’s shares were reduced to 62% during the time of Prime Minister Shaukat Aziz. In related news that came in on Saturday, the government is likely to put up its remaining stake in the presently state-owned Pakistan Telecommunication Company Limited (PTCL), as reported by the Business Recorder. The government has decided to privatize Telephone Industries of Pakistan (TIP) and PTCL. The National Assembly’s Standing Committee on Privatization was informed of the government’s decision to privatize 49 organizations within the next five years in two phases.