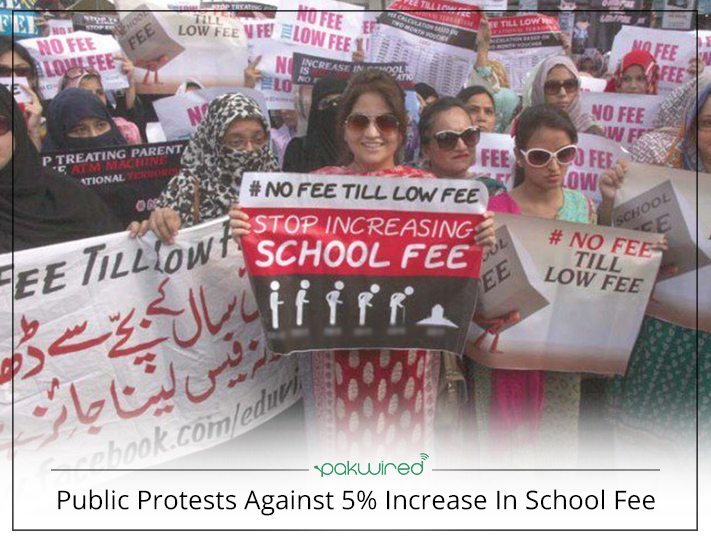 Following the latest hike in school fee of private institutes, a number of people gathered at Shahra-e-Faisal in Karachi to protest against it. Parents gathered to protest against the issue with the hashtag; #ParentsAreNotATMs. Protesters claimed that this ridiculous amount of fee that they have to pay is nothing but an attempt to increase the school’s profits and revenues as it has nothing to do with the quality of education they provide.

There has been a 5% increase in school fee of private institutes and protesters claimed that it is strictly against the law as the government of Sindh already declared it as a violation last year.

However, all of this didn’t stop the schools from raising their fee and this has outraged the parents. The protest included different slogans and banners such as “no fee till low fee,” and “stop increasing school fee”.

Who is the culprit?

Anyone with a sane mind can never justify such an increase in school fee. People who were looking from the sidelines, also sympathized with the parents. However, the main reason these institutes are increasing their fee so freely is because the neglecting of such issues by the people of upper-middle class. As they can afford such high fee, they expect everyone else to do the same too and hence, they never occur a word against such offenses.

One more thing that has ruined education for the country is tuitions and academies. Parents send their children to school and after their children come back from a 6 hour study routine at school, guess what? They are sent to tuitions and academies immediately after that. 6 hours at school and 4 hours at a tuition center turns your kid into a robot. What’s the point of sending your kids to school if they are going to learn the same thing again at that tuition center?

Quick Read: Finland to revolutionize their education system by removing all school subjects

Things like these are the cause of such protests and to achieve a result by these protests is pretty unlikely. To eradicate this unjust system, there is a need of something bigger than a protest; a continuous struggle and legal action against such institutes might do the trick.