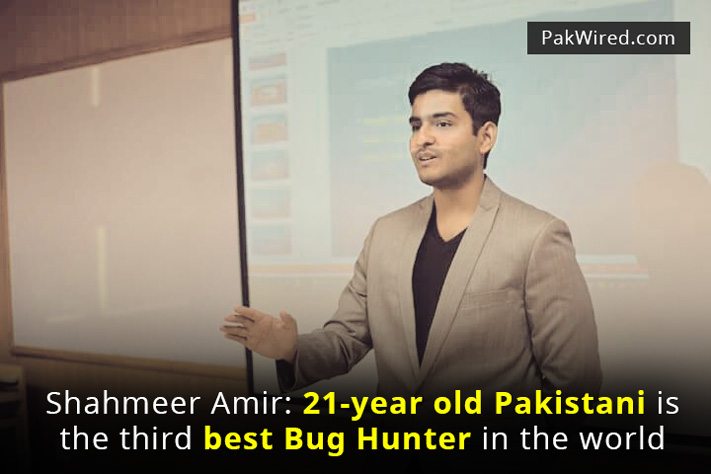 It takes 10 to 15 years for someone to earn as much as Shahmeer Amir already has in such a brief period due to some extraordinary hacking skills. 21-year old Pakistani, Shahmeer Amir, was born in Multan. He is currently the third best bug hunter in the world.

Besides being the third best bug hunter internationally, Shahmeer Amir is also ranked at the 11th most top-rated hacked in the world at present by HackerOne (a vulnerability disclosure company in California).

21-year old Pakistani has made as many as $150,000 by reporting bugs to more than 300 international organizations. Shahmeer earned this much amount in the space of just 2 years by reporting bugs to some big companies like Facebook, Twitter, Microsoft, Google, Yahoo, LinkedIn, Dropbox etc.

Talented youngster from Multan is currently working with initiatives where he will come up with ideas later to secure the cyberspace of Pakistan from internal and external threats. Moreover, the third best bug hunter is also invited to the DEFCON event by HackerOne which is the biggest hacking conference on the planet.

No media spotlight for one of the world’s best hacker

The gifted individual has already done enough to get into the spotlight but unfortunately the brilliant side of Pakistan is rarely projected. However, ProPakistani.pk recently got hold of him where they talked to brilliant Shahmeer.

Shahmeer Amir moved to Karachi with his family at the age of 13. He completed his primary education from the Rangers Public School, and did his Intermediate in Engineering from a Government Degree College. Later, he secured Bachelor’s degree in Electronic Engineering from Usman Institute of Technology that is under the accreditation from Hamdard University. He was a scholarship holder too.

Shahmeer Amir was always fond of using computers. He used to come across plenty of bugs during his early days when he had the access to Pentium 3. The issues were related to software, hardware and registry and he used to get them all fixed by himself and also with the help of Google.

There was no stopping Shahmeer who never looked back and continued to excel in the field of white hat hacking. Initially, he attended one seminar on cyber security at his university which according to him was the turning point in his life. He termed white hat hacking as ethical hacking while stating:

“My primary role has been to discover exploits in products and services that we use in our everyday life. After I identify a security risk, I contact the people behind the product and they resolve the complaints. As an information vulnerability researcher, they acknowledge my efforts and even pay bounties after successfully resolving the exploits”

When he was asked to make a comment on the cyber security education in Pakistan, Shahmeer Amir answered that there should be more such centers in the country. He stated that:

“I think that there should be more of such Cyber Security training centers in Pakistan that are legitimate ones and that actually help youngsters develop a skill set rather than fooling students. I myself have been a victim of counterfeit education and self-learning was my only chance”

Besides being an ethical hacker, Shahmeer Amir is also a philanthropist who has donated almost half of his amount to different causes and individuals who were in a dire need of some help. He was inspired by the fighting spirit of (late) boxer Muhammed Ali who recently passed away.

21-year old Shahmeer is currently in Lahore where he is managing his own cyber security startup, Cyphlon, with a team of 6 people under the stewardship of Plan9, Punjab IT Board (PITB). Shahmeer along with his team regularly discuss the ideas about how to solidify the defenses of the Pakistani cyberspace and IT companies.

Shahmeer has tipped all the potential hackers in Pakistan to focus on learning more initially than earning. The idea has helped him greatly too. He stated that:

“I have seen many researchers going towards earning $$$ before they even know the basic architecture of a web application. Don’t make that mistake. I did in the past and I had to earn my respect back by working twice as hard. Learn before earning and donate generously, it will help you achieve countless blessings”

Shahmeer’s work can be seen here. Moreover, he can be reached here. Hopefully this success story will inspire the current generation of Pakistan to take up ethical hacking as a profession.