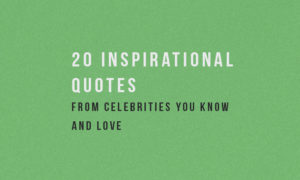 We don’t always look at our favorite celebrities as soulful, wise people with inspirational things to say, but why not? After all, most of these celebs have gone through extremely challenging life experiences and have surpassed countless obstacles to reach their success. They surely learned a thing or two worth sharing along the way.

Oprah, for instance, had been abused as a child but eventually became one of the most successful African American women in the world.

Leonardo Di Caprio, similarly, had been poor for most of his childhood but, with time, he became one of the most recognized actors of his generation.

As for Katy Perry, she was raised in a very strict and conservative manner, having been banned by her parents from listening to any rock or popular music throughout her entire childhood. Now, Katy Perry is a pop music sensation.

George Clooney struggled with Bell’s palsy when he was younger, which causes partial facial paralysis, but he eventually recovered from his illness and became dubbed the sexiest man alive!

Superstar Lady Gaga was bullied so much in school that she would not want to go to school on certain days. She would be called names and would get picked on. But Gaga’s story is truly an inspirational one because she credits that bullying to her billions of YouTube views and to her current success.

Some of these stars have said some things that would truly inspire anyone. The following infographic about celebrity quotes by Life Coach Spotter will help you restore balance, motivation and positivity.