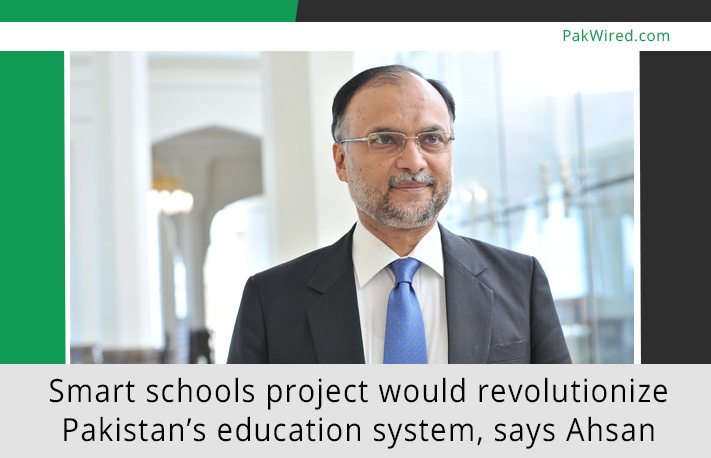 Federal Minister for Planning, Development and Reform Ahsan Iqbal has directed to complete all educational reforms projects by early next year as mentioned by Vision 2025. The minister also stated that next academic session in 2017 should start with smart schools. He also said that the government is committed to revolutionizing the education system.

Ahsan Iqbal gave these instructions while chairing a high level meeting in Islamabad. The meeting was attended by the officials of Ministry of Capital Administration and Development (CADD), Education and Federal Board of Intermediate and Secondary Education (FBIS).

The minister was briefed about the progress of education sectors in Pakistan including smart school project. The minister emphasized on speeding up the pace of work while stating that smart schools should be operational by next academic year.

As many as 32 existing schools will be transformed to smart school under this government’s project. Out of 32 schools, 24 will be chosen from ICT region while 8 will be selected from the provinces.

The minister asserted that there is a dire need to reform the whole system of examination like testing, evaluation and compilation of results. He stressed that all provinces should have standardized examination system. Moreover, Ahsan Iqbal also highlighted to keep the private sector in the process of reform in the national curriculum. He said:

Federal minister also instructed the authorities to include the subject of arts and make it compulsory. As a result, it will inspire creativity among the students. Furthermore, he said that science, technology, engineering and mathematics (STEM) subjects are critical for the future of Pakistan.

Do you think the project of smart school will enhance the level of education in Pakistan?